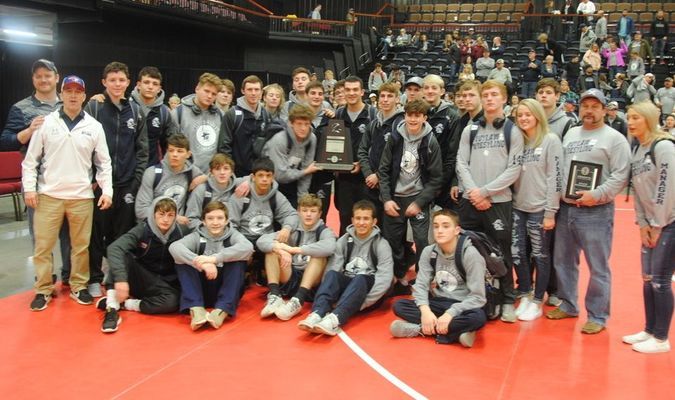 For the second year in a row, Marlow faced Perry for the Dual State championship and this time they made Perry work a lot harder for their 12th straight title with the Maroon claiming a 38-27 win.

“We gave ourselves a chance,” said Andy Howington, Marlow wrestling coach. “We lost some close matches. We need to find the mentality to get over that hump.”

Still, Howington is pleased with his team’s performance that gave them their second straight Dual State runner-up trophy.

“I’m proud of these guys,” Howington said. “We went like 13-1 in duals this year and they battled the whole way. The season’s not over, yet, though. We still have a job to do.”

Marlow will be hosting a regional tournament that will feature nearly 30 teams Thursday and Friday.

“Hopefully, we can get a lot of these guys qualified for state,” Howington said.

Marlow’s Cheyenne Davis opened the match at 132 with a loss by pin before Jordon Taylor came right back at 138 and pinned his opponent in the second round to tie the team score at 6-all.

Kobey Kizarr then picked up a pin at 145 pounds in the second period and Marlow had the lead for the first time.

After Matt Branum's loss in the closing seconds of the match at 152 pounds, Tyler Lavey came back and won his match to keep Marlow’s lead at 15-9.

Perry would win the next three matches and retook the lead with 13 straight points. They would never trail again.

Marlow would get three more wins in the match. Brennen Morgan and Kyle Davis would win by decisions and Anthony Orum capped off the match with a pin in the third period.

The Marlow wrestling team got some big performances from its smallest team members.

Trailing Comanche 25-23 with three matches left, Case Rich and Tyler Lawson, Marlow’s 106-pound and 113-pound wrestlers, respectively, both came up with big wins to guarantee Marlow a spot in the championship match against Perry.
Rich, a freshman, got a major decision with a 13-4 win that gave Marlow a 27-25 advantage. Lawson then came in and quickly pinned his opponent in the first period to give Marlow an insurmountable eight-point lead heading into 120 pounds. Already guaranteed the win, Marlow forfeited the final match to make the score, 33-31.

“I thought we wrestled well,” said Howington. “We knew it was going to be tough and everybody knew they had a job to do. I’m not surprised it came down to the late matches.”

Howington said there were no surprises either way but he was especially happy with the way Jayden Absher went the distance with Comanche’s Gage Miller, one of the Indians’ top wrestlers. Absher lost an 8-5 decision, but his ability to go the distance meant Comanche got the minimum three points for a win instead of a bigger number.

“I thought he wrestled well against Miller. He didn’t give up any bonus points,” Howington said.

The match started at 126 pounds, which is the heart of the Marlow line-up with defending state champion Orum getting Marlow off on the right foot with a 12-6 decision. He was followed by a Taylor win by pin and an 11-5 win by Kizarr that gave the Outlaws a 12-0 lead out of the gate.

Marlow still had a double-digit 23-13 lead after nine matches with Lavey (160), Kyle Wilson (182) and Carson Moore (195) all getting decisions. Comanche would win the 220 and 285 pound matches by pin to take a two-point lead before Rich and Lawson tipped the scales back in Marlow’s favor for good.
Quarterfinals

Marlow had no problems in their opening round of the Dual State tournament as the Outlaws used a run of seven straight wins to defeat Sperry, 51-12.

Sperry led 6-3 after the first three matches, but the Outlaws won the next seven matches, including six by pin to take a big lead.