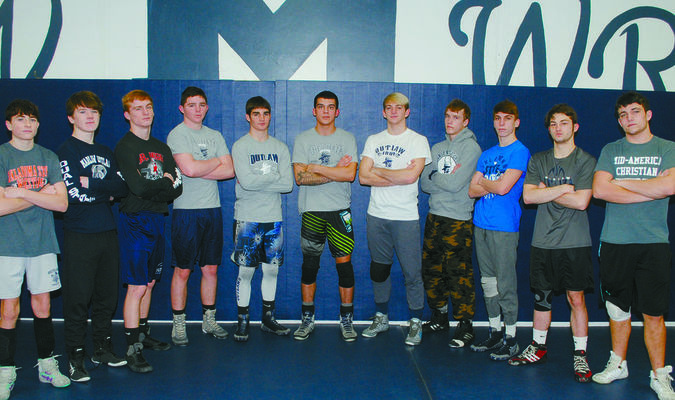 The home mat was good to Marlow.

Heading into last weekend’s regional tournament, Outlaws’ coach Andy Howington thought that a good number of state qualifiers from Marlow would be about eight. Marlow was able to do that and more as Marlow qualified 11 wrestlers in 14 weight classes.

To top it off, the success propelled the Outlaws to a team regional championship, beating out the other 26 teams competing. Comanche was second.

Marlow had just one regional champion in Tyler Lawson at 106 pounds, but the chance at the big prize awaits at the Big House at the State Fairgrounds in Oklahoma City this Friday and Saturday.

The 11 qualifying were Lawson, Case Rich at 113 pounds (fifth), Kyle Davis at 120 (third), Anthony Orum at 126 (second), Jordon Taylor at 132 (third), Kobey Kizarr at 138 (third), Bryson Hughes at 145 (fourth), Jayden Absher at 152 (fifth), Tyler Lavey at 160 (second), Kyle Wilson at 170 (third), and Carson Moore at 195 (fourth).
“We do (feel pretty good about the success), now we just have to go to back work to get better for next week,” Howington said. “Next week is a new week. We’ve been working hard, but to get 11 in there, that’s good. Everyone hopes to get seven or eight in there but we got a bunch of bonuses in there, and now we just need to go wrestle and make it happen. I think we wrestled well, we stayed after people the whole time. I had a bunch of coaches tell me that our team was prepared and that’s what it takes at this time of year is to be prepared.”

Marlow had nine wrestlers in Friday afternoon’s semifinals, which guaranteed them at least nine spots at state. Rich and Absher had the added pressure of having to win in Saturday night’s final session to advance, which they managed to do. Kale Hunt fell just short of making it an even dozen going to state, finishing sixth.

Marlow won 13 of its 14 first-round matches, which got them started toward the regional championship.

It has been more than a few years since Marlow was able to host a regional and Howington thinks that Marlow was successful at that, too, as dozens of volunteers made sure it ran as smoothly as possible.

“I had a bunch of coaches come up and tell me they thought we did a good job,” Howington said. “We kept it on time, ran it as fast as we could and got out of here.”