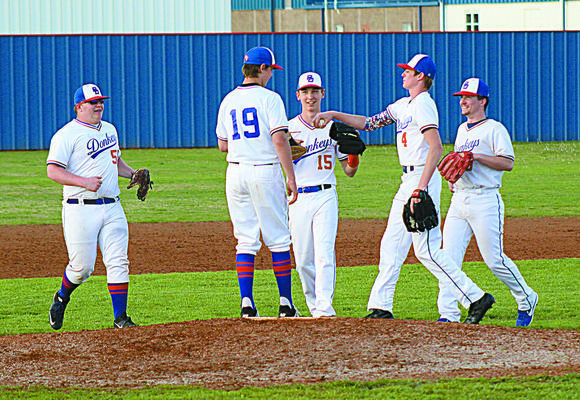 Bray-Doyle Freshman Tully Booth threw a no-hitter on April 4, striking out ten and walking one to earn the win against Millwood 10-0.

Offensively, smart base-running was the name of the game. Bray-Doyle players stole seven bases in four innings of play, with Skyler Cash, Weston Edwards, and Booth stealing two each. Curtis Cox tripled on a line drive in the first inning, bringing Mark Kilbourn in for the first score of the night. Cash’s sacrifice fly brought Cox in, and Edwards’s walk and steal to third put him in scoring position for the third run of the inning.

Josh Hall reached first on an error in the second inning and made the most of it, advancing to second on the same error and stealing third, then scoring on a grounder by Justin Miller.

Dalton Whitehead’s single in the third inning brought Booth and Edwards in to bring the score to 7-0, then scored on Miller’s line drive. Kilbourn reached on an error, while Hall scored again.

Two Millwood players reached base during the fourth, one on catcher interference and one hit by a pitch. Strikeouts by Booth prevented them from advancing to scoring position.

Whitehead’s double in the fourth inning brought Cash and Booth home, ending the game at 10-0 for the Donkeys.