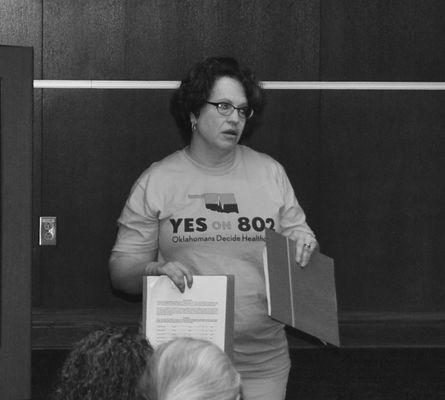 Duncan Regional Hospital hosted a meeting on Saturday to train volunteers for the coming push to obtain signatures on a petition to get State Question 802 on the November 3, 2020 ballot. The measure would amend the state Constitution to expand Medicaid to low-income individuals who earn less than 133% of the federal poverty line.

“This will bring life-saving healthcare to over 200,000 Oklahomans who are uninsured,” Harrison said. “Oklahoma ranks second-highest in uninsured in the United States and we are 47th in health rankings, unfortunately, and part of that health ranking has to do with the fact that we don’t get folks preventative care.”

Harrison continued, “This will bring back over a billion dollars of our tax dollars that go to [Washington] DC and thirty-six other states that have expanded Medicaid.”

Doug Volinski, Chief Financial Officer at Duncan Regional Hospital, pointed out that DRH provides health care to over 45,000 residents in the community, many of whom don’t have regular doctor visits. “Almost twenty percent of the residents don’t have insurance. That limits access to care. People don’t go to a doctor; they go to the [emergency room] for primary care….They do that because they don’t have insurance and it costs money. A primary care physician is there to help manage your illnesses and be able to have a relationship with a patient and that doesn’t happen in the ER. That’s not what they’re there for.”

Volinski also discussed the financial effect of declining Medicaid expansion. “Six hospitals in Oklahoma have closed since 2016, eight of them have declared bankruptcy,” he said. “That hurts rural communities, local communities, not having health care.”

Volinski continued, “One of the biggest things is, we pay federal taxes that have been used to fund Medicaid expansion throughout the country…so our money has been paying for expanded healthcare in other states and it’s time to bring the dollars back to Oklahoma and pay for care for people here locally.”

“This will provide insurance for anybody that meets the 133% of federal poverty guideline,” Volinski said. “A lot of these people who don’t have insurance, they’re hard-working people. They just don’t earn enough income to be able to buy it or they work for a company that doesn’t provide insurance.”

Oklahoma law requires 178,000 signatures on the petition in order to get the measure on the ballot, based upon the statute that the number of valid signatures is determined by calculating 15 percent of the votes cast for governor in the last gubernatorial election. However, organizers are hoping to capture over 200,000 in order to ensure that the proper number can be validated. The deadline is October 28.