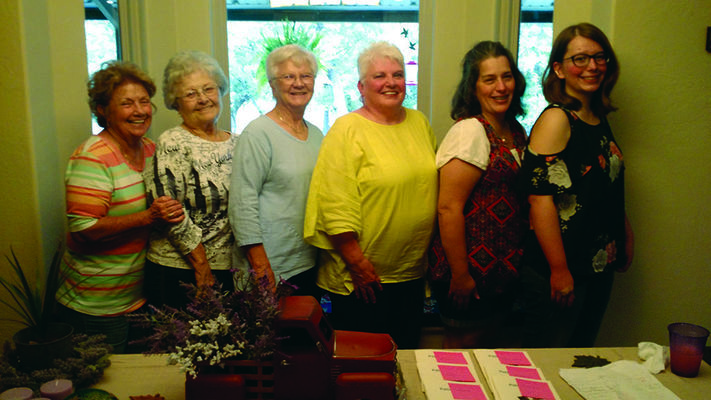 The Marlow Patio Garden Club began its 2019-20 year with a meeting in the home of Mrs. Bettie Cooper on Thursday, Sept. 12. Opening the meeting at 1 p.m., Mrs. Cooper announced the addition of seven new members joining garden club.

Opening the business portion of the meeting with roll call, members were asked to answer by sharing something special they had done or accomplished during the summer.

A devotion time was shared by Mrs. Holland, who read a poem from the book entitled “Forever in my Heart.”

Mrs. Atnip gave a treasurer’s report, followed by Mrs. Cooper handing out new year books which list all upcoming meetings, state officers and names of Patio members. She also shared that the yearbook is dedicated to long time member Mrs. Shirley Gee who passed away in March of this year.A letter was read from the Madill Rose Garden Club inviting members to the annual South Central District Fall Board Meeting to be held on Oct. 10, in Madill.

Members were informed that installation of new officers will be held at 9:30 a.m., with a board meeting at 10 a.m., followed by the regular meeting at 10:30 a.m. Lunch will be served and a silent auction will be ongoing throughout the meeting.

Upcoming meetings: The SC Dist. Meeting at Madill will replace the club’s regular October meeting; Nov. 14, the club will host a Soup/Chili Supper and plant sale at Conway Hall in Marlow. Members were reminded to invited guests and their spouses; Dec. 12 will be the club’s annual Christmas meeting and will be at the home of Joyce Hodge.Mrs. Cooper also reminded members the local club will be hosting the South Central District Spring Convention. Date of the convention is yet to be announced.