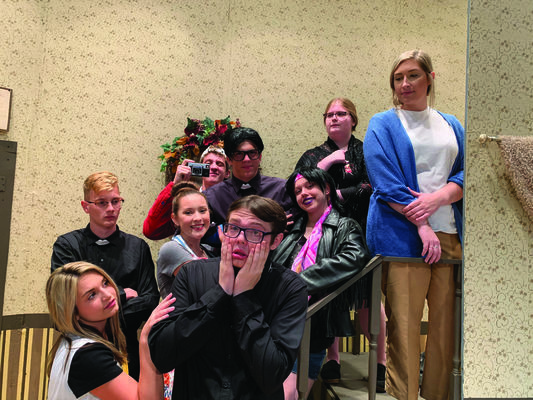 Students and the public are invited as the Marlow High School Advanced Drama class presents their fall play, “I’ll Get My Man,” this weekend at the high school auditorium.

According to Marlow High School speech teacher Paula McConnell, “I’ll Get My Man” by Philip King is a comedy by Philip King that takes place in the home of the meek, forgetful Arthur Humphrey (James Shirley) and his sister Harriette (Abbe Johnson). Humphrey, horrified by the threatened loss of his housekeeper Mrs. Carter (Elena Holguin), advertises for a wife, but absentmindedly omits important information. Their nephew Peter (Joshua McMains), a television celebrity, has come to seek refuge from the throng of girls chasing him. These two occurrences shatter the peace of the household. And the farce begins. There is Mrs. Barrington-Locke (Savanah Triplett), the community lady who listens to no one; Josephine (Melissa Cooper) who believes she is part of their past; and Pixie Potter (Colbey Calloway), who is seeking Peter with a vengeance. The arrival of the Bishop (Caleb Warren) adds to the confusion. And a paparazzi photographer (Kash Kern) makes it worse.

“This production, of course, takes more than the 9 actors that you see on stage,” McConnell said. “Aubrey Topping has been our student director, while Gracie McMains and Raylin Garret are managing lots of props and Jaiden Standridge is manning the lights/sound. Stagecraft took on the challenge of designing and building the set. This team includes Bailey Blevins, Colbey Calloway, Raylin Garrett, Noah Hammond, Abby Kelly, Gavin Kizarr, Gracie McMains, Joshua McMains, Mikaylee Ribble, Alli Riddle, James Shirley, Aubrey Topping, Braeden Whaley, and Melinda Whiteman. And let’s not forget all the Advanced Drama students who accomplished all the odds and ends.”

The matinee for students is Friday morning, October 11, and the public performance is scheduled for Saturday, October 12 at 7pm. The cost for the evening performance is $3.00 per person and tickets are available at the door.