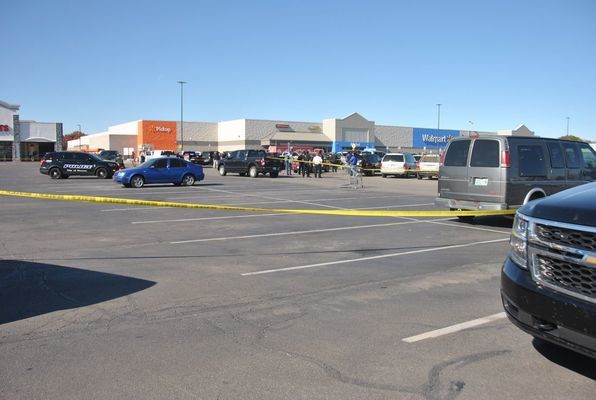 Three are confirmed dead after a shooting that took place Monday morning in the parking lot at Walmart in Duncan. Duncan Police Chief Danny Ford confirmed at a press conference that the shooter is among the deceased.

According to Ford, a report of gunshots came in to the Duncan Police Department at 9:53am and officers were on the scene at 9:54. “There were three deceased individuals,” Ford said. “One female, one male was found deceased in the car and one male outside of the car.”

“There were several rounds found inside the car and a handgun was found on the scene,” Ford said.

The Chief said that tentative identifications had been made of the victims but he was not ready to release the identities at the time of the press conference, and no motive was immediately available.

Ford did say that he believed there was enough information to confirm that the shooter had turned the gun on himself. He also said that there was another person on the scene who was armed. “There was a person there that had drawn a weapon, it was an outsider, but he had not approached the individual.”

Ford said that law enforcement officers were looking at surveillance video of the parking lot.

Ford said that witness descriptions of the incident were consistent with what was found on the scene.

“At some point the shooter did walk up to the car,” Ford said. “We don’t know if initial shots came from the ground walking up to it or maybe from another vehicle.”

Ford said that two of the deceased had been to the “money center” inside Walmart prior to the shooting.

District Attorney Jason Hicks said that the shooter had not been inside the store prior to the incident. “There was at no time anybody inside Walmart or anybody who had been threatened inside,” he said. “I want make sure that’s crystal clear that this happened in the parking lot and it appears to be an isolated incident between the three people who were involved.”

The gun was confirmed to be a semi-automatic but Ford was unable to state what caliber it was. He said that investigators were looking at how many shots were fired. “I can account visibly for nine,” he added. He was unable to say where on the body the victims sustained injuries. “Too many rounds,” he explained.

No bystanders were hit and Ford said that he was unaware of any damage to other vehicles in the parking lot.

Ford said that OSBI and the ME would continue to work the scene and speak to additional witnesses as they became available. “We’re waiting on the main investigator to come in and fill us in.”

Ford said that the incident would make people in the community “very fearful.”

“It’s a change in the community,” he said. “We’ve gone a while …without a major incident like this so it puts everybody on edge. Puts the schools on edge, hospitals, businesses, everyone’s on edge so I think it’s something that we need to get as much information as we can. That’s the reason we’re being so methodical with the investigation.”