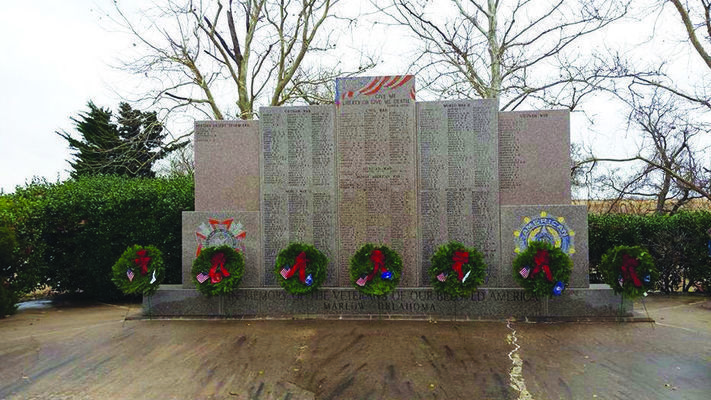 Saturday, December 14 marks this year’s Wreaths Across America day. The event will take place at over 1600 locations across the United States, including Marlow, Duncan, and Comanche.

In Marlow, the Duncan Indian Territory chapter of the National Society of the Daughters of the American Revolution (DAR) will hold a wreath-laying ceremony at the Marlow Cemetery on Saturday at 11am. The seven wreaths, provided by the national WAA organization, represent all branches of the armed forces (Army, Navy, Air Force, Marines, Coast Guard, Merchant Marines) and POW/MIA.

“Our DAR chapter has held it at the Marlow Cemetery for the past 6 or 7 years,” said Susan Denard, Regent of the DAR chapter. “We partner with veterans from the area.”

Veterans of Foreign Wars (VFW) Post 1192 will host a Wreaths Across America ceremony at Memorial Park in Duncan on Saturday at 10am. “We hope everyone in Stephens County will meet us there to share the wreath on the memorial,” said Larry Davidson, one of the organizers of the local event.

“It’s important to honor the sacrifice of these men and women in the fight for freedom,” said Davidson.

The practice began at Arlington National Cemetery in 1992. The organization’s founder, Morrill Worcester, owned the Worcester Wreath Company in Harrington, Maine. Finding his company with a surplus of wreaths as the holidays approached, Worcester remembered a trip to Washington, DC and Arlington National Cemetery that he had taken when he was only 12 years old. With the help of his Senator, Worcester arranged for the wreaths to be placed at Arlington in one of the older sections of the cemetery that didn’t have many visitors.

Worcester, with the help of local trucking companies and local American Legion and VFW Posts, continued to place the wreaths in tribute until 2005 when a photo of the Arlington Cemetery, decorated with wreaths and covered in snow, went viral. Worcester received thousands of requests from all over the country.

Initially, Worcester sent seven wreaths to each state, one for each branch of the military and POW/MIAs. Eventually groups were organized across the country to coordinate simultaneous wreath-laying ceremonies in each state.