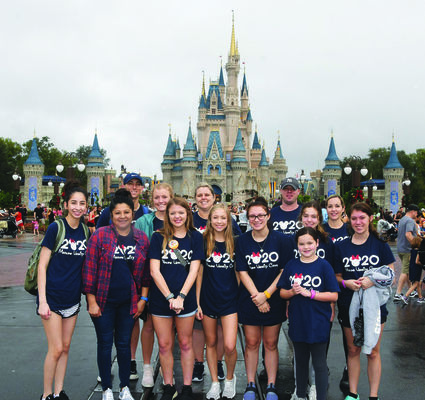 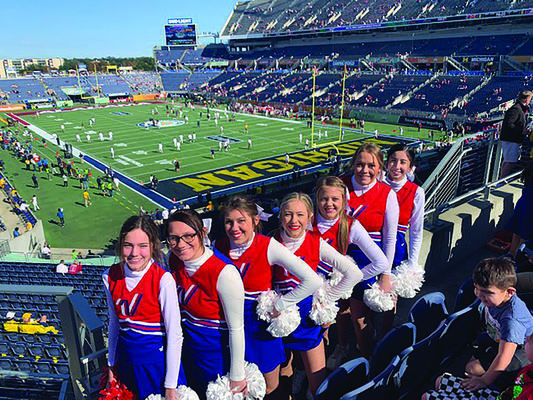 The team’s journey to the Citrus Bowl – the second in a row that Marlow cheerleaders have participated in – began in the summer of 2019 when the Marlow team attended cheer camp at the University of Oklahoma and earned the overall Superior Varsity Cheer Team title and were extended an invitation to participate in the 2020 Citrus Bowl.

In October the team received a video of the pregame routine and their preparation began in earnest.

“We started learning the cheer on top of all of our other practices,” said Kearsten Ball, one of the Marlow cheerleaders who went on the trip. “But once we got [to practice in Orlando], everything got a lot faster.”

The team spent several hours each day in rehearsal with successively more elements and larger groups, ending in a closed field rehearsal with coed squads and mascots the morning of the game. Then it was “game on.”

“Everything was pretty easy to pick up,” Ball said. “We had a lot of preparation and help to made it great.”

Her teammate Kyah Blundell agreed. “We were all in lines on the field and I was in the front of the Marlow team, so I couldn’t see them behind me,” she said. “Everyone around me felt like a part of my team.”

“This was a once-in-a-lifetime thing,” said Ball, who is a senior. “I won’t have this experience again.”

Marlow Cheerleading coach Amy Herchock recognized the unique opportunity the trip afforded. “It was truly an honor to accompany the cheerleaders to the Citrus Bowl for a 2nd time. That was one of our goals we made prior to cheer camp and I couldn't have been happier for the girls to have achieved that goal,” she said.
Herchock added that of the group in attendance, eight had never been to Disney World and five had never flown.

“The opportunity it provides to the girls is two-fold,” Herchock said. “First, it allows them the chance to travel outside of Oklahoma to a peak event and explore new experiences. I always try to 'throw in' some educational value to the trip whether the girls realize that or not. Secondly, it's a great reward for hard work and effort to go and represent the community of Marlow alongside other cheer squads across the United States.”

Herchock relishes the experience the team had while working hard in rehearsal and having fun at Disney World. “My love for this event are the experiences and memories the girls create for themselves and each other. It's not about me - it's about the girls and giving them some life opportunities they will hold on to always.”