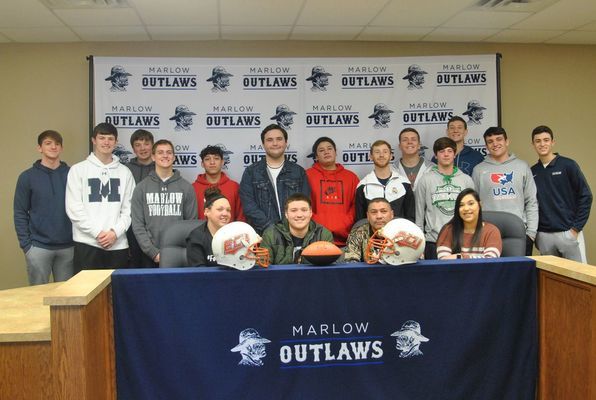 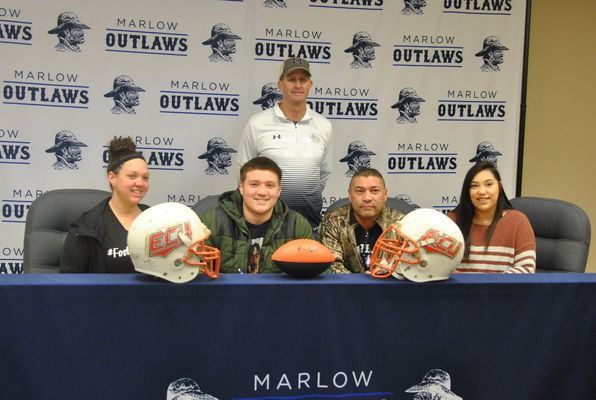 Last week’s weather caused a slight delay, but on Friday morning Marlow senior Seth Aguilera signed a Letter of Intent to play football at East Central University next fall. Aguilera was all smiles as he gathered with family, teammates, and coach Matt Webber to make it official.

The 2019 season was Webber’s second to coach Aguilera, and he said he’s not at all surprised that ECU wanted him to join the team.

“I feel like this is well-deserved,” Webber said. “He’s a self-made kid, really self-motivated.”

“The program looks really good,” Aguilera said. “The environment at ECU is nice. I’m excited for this opportunity.”

Aguilera has played football since seventh grade. “I’ve been working toward this for years,” he said. “My senior season with the Outlaws was super fun, but I’m looking forward to what’s next.”

What’s next will have to wait a few months, however; Aguilera is a key player in the upcoming basketball playoffs and will spend the spring throwing shot put and discus on the Outlaw track team.

City of Marlow to follow State mandates for COV...