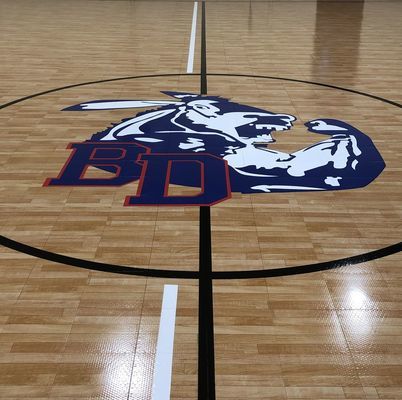 The Bray-Doyle School Board voted again on Monday to no longer participate in the Stephens County basketball tournament with a 3-2 vote.

This was the second time that the issue had come to the Board; it was on the agenda of the February meeting and the board members voted at the time to leave the tournament, but Superintendent David Eads said that he thought it should be revisited due to contact he’d had from community members and the Stephens County Coaches Association (SCAA).

Newly sworn in board member Karl Shackleford said that the response to February’s vote was overwhelming. “I have gotten lit up over this and I wasn’t even on the school board,” Shackleford said. “My house has gotten about twenty phone calls.”

Eads said that he understands why the coaches were in favor of ending the teams’ participation, “But I also see the community side.”

“My problem is I see the side that’s ‘If you can’t win, just go ahead and move on,’” Shackleford said. “If we’re going to do that then let’s quit playing football. When’s the last time we won a Grand Championship at the Stephens County Free Fair…let’s quit that and do something else.

“It’s teaching them to quit working and go somewhere else.”

Eads said that his contacts had included the secretary of SCAA, who had told him that Davis schools were also not returning to the tournament and that the long-standing annual tournament was in peril of ending, and that dropping the tournament from the schedule this late in the year might prevent the organization from finding a replacement.

“They would rather we stayed in one more year now because it’s so late to schedule another team to replace us and they don’t want the tournament to fail,” Eads said.

“There’s only eight county tournaments left in the state, and we’re one of them,” Eads added.

Eads also said that he personally likes going to the Stephens County Tournament and the community does as well.

“Even if we get beat…there are a lot of good games to watch,” he said. “And they like being there, the camaraderie and seeing people, sometimes that’s the only time of the year they see them.

“I like the history of it…it’s about to be the 100th year, and Bray won the first one.”

He pointed out that with the coronavirus pandemic, it would be even more difficult for the tournament organization to find a replacement because schools already had their schedules made.

Shackleford said that he had gotten a call from an athletic director at another school in the county who said that leaving the tournament would compromise other sports schedules. “They’re not going to invite us…to track meets; they’re not going to schedule us in junior high baseball.”

Board member Sara Long said that she had received calls from members of the community who wanted to continue participating. “Some younger parents whose kids will be coming up into the tournament, and then some of the older generation…they don’t want to quit, they want kids to learn to overcome adversity.”

Eads said that the boys team had performed well in the first period of most games in the 2020 tournament and into the second period, but the team’s bench isn’t deep and the players got tired.

Board chairman Eric Dorman pointed out that the team size was due to instability in the coaching staff. “That’s all our fault,” he said. “The coaches we put in front of them for the last fifteen years.”

Eads agreed. “Up until the last two years they’ve been on a coaching merry-go-round,” he said.

Board member Russ Talley said that the SCCA was using “scare tactics” to keep Bray-Doyle in the tournament. “They say they’ll never let us back in…blah blah blah, but that’s a scare tactic.”

Shackleford made a motion to stay in the tournament, seconded by Long; board member Brian Bearce and Talley voted against. The deciding vote was cast by Dorman, who voted against the motion.