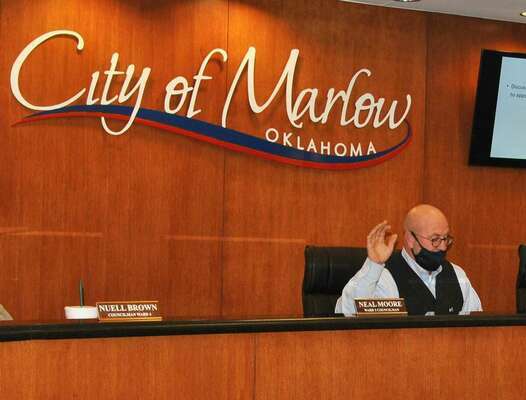 The Marlow City Council on Tuesday accepted the recommendation of the Planning and Zoning Commission to re-zone the property known as 704 S. 4th Street from R-1 (Single family dwelling residential) to C-3 (Planned neighborhood shopping center) to accommodate a business relocation.

The Planning and Zoning Commission had heard from representatives of Blue Rock Therapy and Wellness on January 19 to examine a proposal to rezone the property so that the business could relocate and contstruct a new facility on the corner of 4th and Choctaw streets. Having voted to recommend the change, the Commission sent the proposal to the City Council for consideration.

City Administrator Jason McPherson said that the proposed building is designed to comply with the regulations for C-3. “It’s designed to fit into the neighborhood rather than to be just any kind of business that could come in [to the space], which kind of extends back into a residential area,” McPherson said. He added that there had been no protests to the change.

The City Council approved the recommendation and adopted the zoning change.

John Rich was sworn in to the Ward 3 seat after having filed for the position uncontested. In a later interview, Rich said that he had lived in Marlow most of his life and felt it was a good time to become more involved in the local government.

“It was a good time, a good opportunity to serve my community,” Rich said. “I don’t have any self-interest or agenda; I just want to do what I can because I love Marlow and love the people.”

Elsewhere on the agenda, the Council agreed to seek the $500 Community Improvement Grand through the Oklahoma Code Enforcement Association to assist with the cost of renovating storm siren equipment.

Also before the Council was an agenda item regarding a contract for cemetery office renovation with WW Builders in the amount of $49,861.43. McPherson explained that although the original plan was to utilize a trailer owned by the City to replace the current cemetery office, the necessary repairs were cost-prohibitive.

McPherson recommended that the City Council decline the contract with WW Builders and said that he would have a different plan in place by May 2021, prior to budget planning for the next fiscal year.

McPherson said that the plan would probably include constructing a new building on the property that would house not only an office for cemetery staff, but also the maintenance equipment that currently does not have adequate shelter and security.

The Council agreed that an alternate plan is appropriate and voted to decline the contract.

During the Municipal Authority meeting, trustees considered a contract to remove and rebuild a building in the city yard for storage of used transformer oil per environmental standards, as well as the purchase of required materials.

The trustees agreed to contract with Jeremy Nowlin of Marlow for labor in the amount of $3500.00 and purchase material for the building from J&E Metal Sales in Marlow in the amount of $5144.44, both expenses to be paid from the Marlow Municipal Authority Capital Improvement Fund.