Board Work Continues as School Year Winds Down 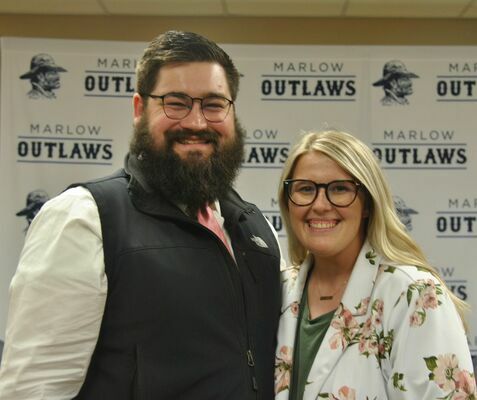 Quaid Kennan, pictured here with his wife Chelsea, was hired to be the next Ag educator for Marlow Public Schools at Monday’s School Board meeting. Kennan is a recent graduate from Oklahoma State University. Photo by Elizabeth Pitts-Hibbard/The Marlow Review

Monday’s regular meeting of the Marlow Public Schools Board of Education included contract renewals for school faculty and staff, as well as renewal of temporary contracts for the 2021-2022 school year. The Board also interviewed and hired Quaid Kennan, a candidate for Ag Educator for Marlow Public Schools. Kennan will assume the role after the resignation of Derek Mitchell, who has accepted the Ag Educator position with Central High Public Schools.

In his Superintendent report, George Coffman said that Marlow Public Schools had been accredited with no deficiencies. Coffman also said that federal stimulus funds would be distributed in July.

“Once we get that third round of money we’ll be in pretty good shape,” Coffman said.

Marlow Elementary School Principal Kim Kizarr reported that state testing had been completed at the school and that the fifth grade, which has the most required tests, had perfect attendance during all four testing periods.

Kizarr also said that Kindergarten teacher Heather Gage had been the Classroom Hero honored at the University of Oklahoma spring football game in April, and is now in the running to be named Semester Hero. Voting is taking place online and if Gage wins, she will receive $5000 for the school.

Ridge listed several “brags” from teachers who are pleased with the students’ performance throughout the semester, and said that students are still focused on education despite the proximity of the school year’s end.

“We’re still having a lot of school,” Ridge said. “The kids are really disappointed, but it’s great when we get after it for the last few weeks.”

In his report, Marlow High School Principal Bryan Brantley said that nearly 100% of high school Juniors had participated in the required high school testing that includes the ACT, a science test, and US History test.

Brantley also pointed out that due to recently-passed legislation, a citizenship test will be required for graduation next year.

“I’m sure all of our legislators could pass the citizenship test as well,” Brantley said.

Brantley said that prom on April 16 had been successful but “uneventful.”

“Not as uneventful as last year,” Brantley joked, indicating the cancelation in 2020 due to COVID-19. “But the kids had more fun than I’ve ever seen them have. I think they were just ready to get on the dance floor and have some good clean fun, and it was fun watching them.”

The members voted to reorganize the Board positions, with Mark O’Neal as President, Darren Alaniz Vice-President, Chat Choate as Clerk, Terry Turner Deputy Clerk, and Cody Bannister as a member.

Hines Named Teacher of the Year