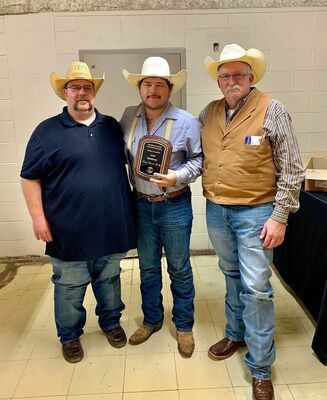 Stephens County Livestock Growers Association held their annual banquet on May 4 at the Comanche Livestock Auction. The organization named Steve Nunley as their 2020 Honorary member.

Nunley, who died on December 28 of last year, was a lifelong farmer and rancher in Stephens County. In high school he served as President of Central High FFA, was a State Star Farmer and went to State with FFA and earned his State Star Farmer Certification.

Nunley was a Past President of Stephens County Livestock Growers Association, was Vice President of the State FSA Board, and served as National President of Farm Bureau YFR.

Steve was the son of Bill and Shirley Nunley of Marlow and had three children: Preston, Graham, and Maegan.

His son Preston attended the banquet to accept the SCLGA Honorary Member award.

Phone issues at The Review office