The Blue Crew: Cheering on to Victory 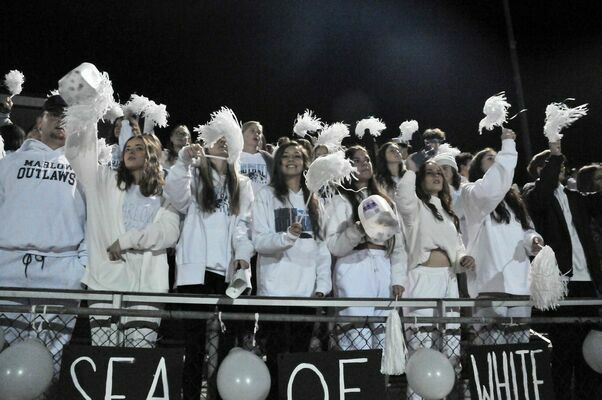 Editor’s Note: This content is part of The Review’s special section commemorating the Outlaws’ historic 2021 season and the Class 2A state championship win. The special section was included with the December 16 edition.

Many schools have a student section at games, where young fans gather to cheer on the team. Not many schools have a student section like the Blue Crew, and certainly no team that the Marlow Outlaws faced this season have. The Blue Crew is a coordinated group of Marlow High School students, and is as much a part of generating school spirit as the band, the Bootleggers, and the cheerleaders.

The Blue Crew is headed by Parker Hayes and Mikayla Fitzhugh, who organized the Crew weekly with input from other student organizations, including dress-up themes and signs.

“Usually Mikayla and I talk about it, and we have a [group message] where we discuss it with a bunch of people like cheerleaders, band members…we bounce ideas off of each other about what we think would be cool for the week,” Hayes said.

The group planned most of the season’s themes in advance, but during the playoffs they had less notice.

“We had to talk about what we thought would be cool, and about who the other team is and which game it is,” Hayes said.

Themes included Neon, Christmas, Skiing, and of course, Gold for the championship game, which was Hayes’s favorite.

The organizers said that some students initially resisted dressing up for games, and they had to assure everyone in the Blue Crew that if everyone did it, no one would joke about it.

“When you see a good student section, everyone’s participating. Everyone’s dressing up, no matter where you’re standing in it,” Hayes said. “I wore a gold graduation cap and gown to the game on Saturday.”

Fitzhugh said that being a part of the Blue Crew was important to help the fans get excited about the game.

“It’s awesome,” Fitzhugh said. “It’s so much fun. Especially when everyone’s into it and we’re all yelling and we’re doing the chants. The band helps us do the chants, too. They’re part of the reason we get so excited when they’re playing.”

Hayes and Fitzhugh said that it’s sometimes challenging to keep the entire Crew engaged and excited, but it’s essential to get everyone on board – particularly when the game got tense.

“We just stay loud and keep yelling for them,” Hayes said. “Saturday night, I had faith in all of them. I knew we could do it, so we all stayed loud.”

“I think it made us louder,” Fitzhugh added.

The Blue Crew has a camaraderie that extends into school activities and even to the basketball season. Hayes said that the group will increase in numbers for basketball because band members can participate, as well as boys who aren’t on the football field any more.

“It’s just fun to me to have everyone support the team,” said Crew member Dara Hunt. “It’s so cool just to be there.”

Hayes and Fitzhugh said the student section was revived last year and leadership was passed to them this season; they are looking forward to passing the torch to the next leaders for 2022.