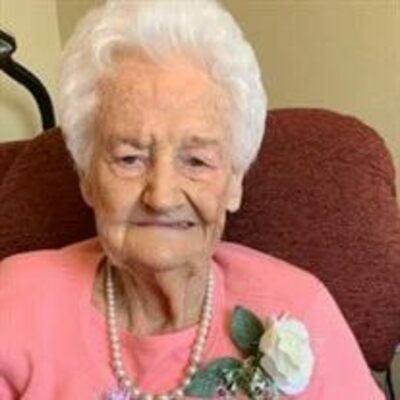 Viva Lee Lovett, age 98, went peacefully to heaven late Thursday evening, June 16, 2022, at her residence at Epworth Retirement Village in Oklahoma City. She was born August 20, 1923, in Claud, Oklahoma to Charley B. and Etiwa (Goodwin) Dove. After completing her high school education in Alma, she married W. R. (Ray) Lovett on July 5, 1941, in Duncan, Oklahoma.

In addition to being a full-time homemaker, Viva’s employment included Tinker AFB, the John A. Brown Department Store, and the Haliburton Department Store in Oklahoma City. Always on the move Ray and Viva also resided in Foster, Ada, Velma, Duncan, Dallas, Texas and Albuquerque, New Mexico. In 1967, Viva and Ray moved to Lawton, Oklahoma where they owned and operated a motel for over 10 years. In 1980 they “retired” to farming and ranching in Marlow, Oklahoma. Additionally, she and Ray enjoyed traveling with ministry groups to Europe and Israel. Viva continued traveling after Ray’s death in 1996.

She was an avid checker player, gardener, reader, and painter. She enjoyed competing in local 5K walks. After recovering from hip surgery in 2013, Viva moved to Epworth Villa in Oklahoma City, Oklahoma.

Viva was known for her love for the Lord, her family, and friends. She attended Mountain View Church, Foster, Oklahoma, Rivers of Life Church in Duncan, Oklahoma, Faith Family Fellowship in Lawton, Oklahoma, and Church on the Rock, Oklahoma City, Oklahoma.

Private school vouchers not in best interest of...