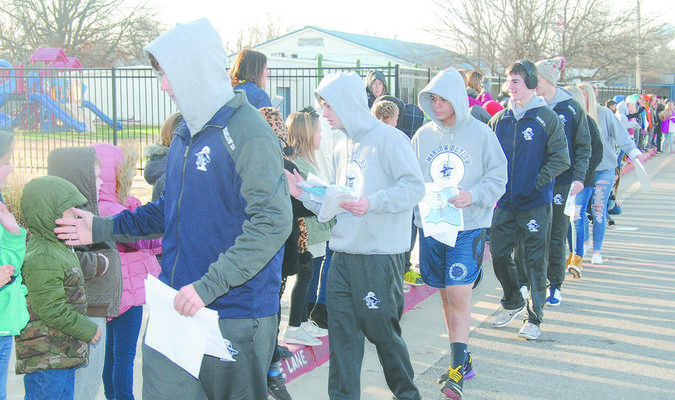 SENDOFF: Marlow Elementary School students wished the high school wrestling team good luck before they boarded the buses to head to Dual State last Friday. The team would go on to finish as state runner-up. The Outlaws are hosting the Class 3A West Regional this Friday and Saturday.

Andy Howington is sitting in his office looking at a computer screen and doing research.

The Marlow wrestling coach, the team, the booster club, parents and even the community have a big weekend ahead.

Come Friday morning, wrestlers from 27 high school teams, including Marlow, will be competing for a chance to go to the Big House in Oklahoma City to wrestle for a state championship.

“There’s a lot of paperwork,” Howington said. “We’ve got to have the brackets out to the other schools after the seeding meeting.”

Coaches will be in town Thursday evening to figure out the seeding. Howington is doing research to find head-to-head and common opponents to help out in the process.

“The gym is definitely going to be packed,” Howington said. “Duncan is hosting a regional, too, and there are teams having to make hotel reservations in Lawton. Our town will be busy.”

Howington thinks there is a chance seven or eight of his wrestlers can make the tournament.

“We told them the other day that when it comes down to this time of year, some wrestlers want to cash it in. A lot of people will want to be done this weekend, so we told them to be the guy that wants to go on.”

Marlow has a strong senior class with Kobey Kizarr, Jordon Taylor, Tyler Lavey, Matt Branum and Cheyenne Davis. Kizarr, Taylor and Lavey have all been state qualifiers. Cheyenne Davis won a girl’s state championship on Friday before joining the team later in the day for Dual State, where the Outlaws finished as state runner-up.

“They’ve been the core group the past few years. Kobey, Jordon and Tyler all went 3-0 at Dual State. They have set the groundwork for the rest of the team,” Howington said.

The OSSAA asked Marlow to host the regional, they did not make a bid for it, the coach said.

“They know the wrestling tradition and the community support down here,” Howington said.

There have been many people behind the scenes working to make the regional a success. There is a hospitality room that needs to be stocked, volunteers to man tables and many other jobs.

“The last time they had a regional here, they didn’t have an awards stand, so they had to borrow one from Comanche or somewhere and it was red,” Howington said. “Bryon Kizarr built one for us this year.”

He is hoping wrestling in Marlow will mean a home mat advantage for his team.

“If we have the same number of people come watch us that we had at Dual State, it’s going to be great,” Howington said. “That was awesome. We had just as many fans as Perry did. Plus, we get to sleep in our own beds and that helps a lot.”