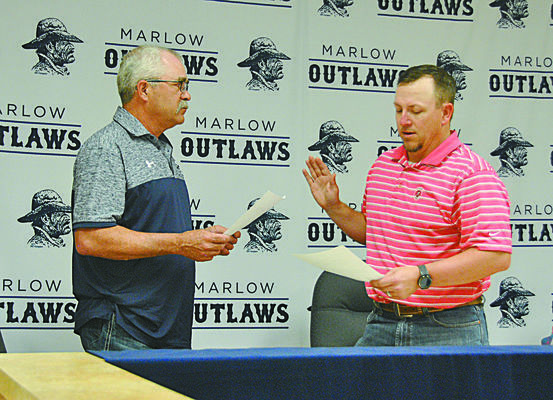 Member Chad Choate was sworn in to Seat 4 on Monday at the regular meeting of the Marlow Board of Education. Choate had been appointed to fill the seat after a previous member resigned in January. Choate is a 1995 graduate of Marlow High School.

Superintendent George Coffman reported that Marlow Public Schools are “at a pretty good point for expenses,” but reminded the Board that with three months of revenue still to come this year, there are four months of expenses to cover. He also told the board that MPS had once again been accredited and had no deficiencies.

High School Principal Bryan Brantley was not present, but Coffman delivered his report. In it, Brantley celebrated the recent success of the High School Speech team, which had just won the second state championship in a row for class 4A. The speech team was also the State Academic Runner-Up with a grade point average of 3.81.

Marlow Middle School principal Ross Ridge reminded the Board about the upcoming Middle School Band concert, and reported that pre-enrollment for High School is scheduled for April 29.

Kim Kizarr, Marlow Elementary School principal, thanked the middle school staff for their assistance with setting up online testing, and credited the push notifications sent out for the near-perfect attendance during test weeks. She also advised the Board that Pre-K enrollment would begin soon. The PTO carnival is this Thursday, April 11 from 5pm-8pm.

In other business, the Board accepted the resignations of science teacher Taylor Schooling, who is relocating to Alaska, and Robin Johnston, who is retiring from the custodial staff.

After an Executive Session, the Board voted to approve contracts for Brantley, Ridge, Kizarr, Assistant High School Principal Jeremy Gage, Assistant Middle School Principal Chad Gilbert, and Athletic Director/Assistant Elementary Principal Kirk Harris, all for the 2019-2020 school year. The contract for Brenda Parker-Tillian, who has served as Federal Programs, District Testing and Curriculum Director for several years, was approved with a title change to Assistant Superintendent.

Approved the contract to provide Family and Consumer Science courses and Agriculture Education courses through the Oklahoma Department of Career and Technology Education Department for the 2019-2020 school year;

Approved the contract with Angel, Johnston, & Blasingame in the amount of $9,600 to provide treasurer’s services for the 2019-2020 school year.

Also passed was a resolution setting the date, time, and place for the sale of the $1,010,000.00 General Obligation Building Bonds of the school district. The bonds will be sold on April 29, 2019 at 1pm at Marlow Public School administration office, 407 W Seminole.