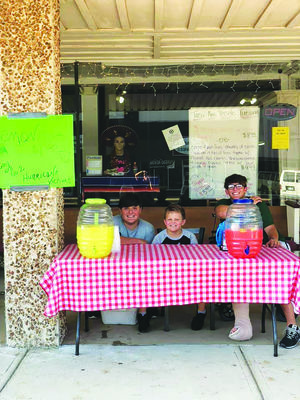 Commuters on Main Street were treated to a new local “business” on Tuesday afternoon: a lemonade stand in front of Flores Mexican restaurant. The venture is headed by Dason Flores, who is raising money for victims of Hurricane Dorian.

Dason is assisted at the stand by his brothers Diego and Joseus, and plans to be open for business every afternoon this week from 4pm -7pm, except for Wednesday when he’ll close at 5:15 to go to church.

“Saturday he’ll probably set up all day,” Shelley said. “His brothers will help him some. He really wants to reach his goal and more, if possible.”