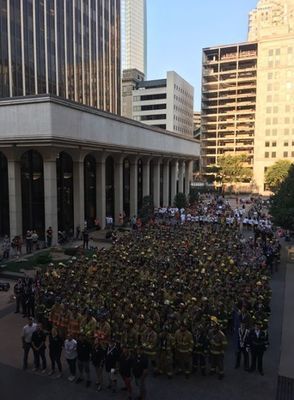 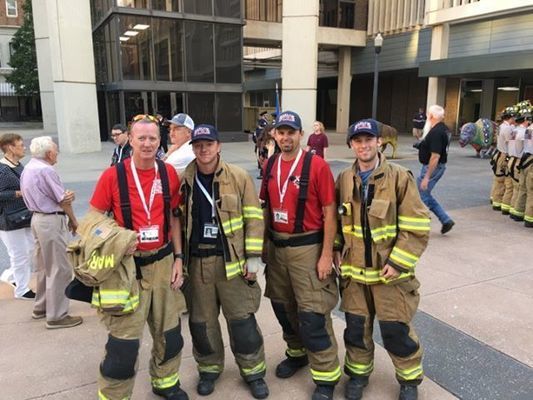 Marlow High School seniors Dayton O’Neal and Ty Linam were just infants on September 11, 2001, but the impact of that tragedy has had a lingering effect on them – and all Americans – just the same. That impact was brought into sharp relief for the young men last weekend when they, along with fellow Marlow firefighters Jeff Prater and Eric Spurlock, participated in the annual 9/11 Memorial Stair Climb in Oklahoma City.

The climb, extending up 110 flights of stairs, was held at the Chase Tower and involved 343 firefighters and 61 law enforcement officers, the same number as perished in the terrorist attack on 9/11.

“Since 9/11 statistics have shown that there are more first responders dying from respiratory illnesses and cancer as a result of the attack, so the number of people dying from the effects of that day will increase,” said Prater. “But the 343 represents the number that died that day.”

The climb took them over two hours to complete, as participants dealt with the heat in the stairwells, coupled with the burden of full firefighter gear.

O’Neal and Linam share the award for youngest to participate this year, having just joined the Marlow Fire Department as volunteers after they turned 18 within 12 days of each other this spring.

“It was important to represent Marlow for the fallen,” O’Neal said. “It means more to me now than before I got on the Fire Department.”

Linam has always wanted to serve with the Fire Department, especially since his father works full-time as a firefighter. He said that he’s always known about 9/11 and its effect on the nation, but his perspective changed after doing the climb.

“It meant something to me before we went up there,” Linam said. “But leaving was a whole different perspective. I didn’t realize how many lives were really lost in the 9/11 tragedy, but seeing real-world numbers and the number of people coming in to do the climb, it really hit home.”

“It’s not as personal when you see people on TV,” O’Neal added. “You can’t get an idea of what it was like.”

Linam agreed. “Once you see people you know, shoulder to shoulder alongside you, it’s different.”

On the other end of the spectrum, Prater has been involved with the Department for 28 years. “My Marlow guys are my brothers in the service,” he said. “But when something happens in Dallas, Los Angeles, New York City, Bray Oklahoma, it affects all of us because of the brotherhood. That’s when I think our reverence comes into play, is to honor our fallen brothers.”

Prater remembers the first time he went to the event several years ago. He didn’t climb that year but served in a leadership role, acting as a sort of “dispatch” that sent groups in to the building. He said it gave him a different perspective on the mindset of the first responders that were on the scene at the World Trade Center. “Whenever I saw them walking down the street to be dispatched into the climb, smiles on their faces knowing they were going to do a job but not knowing what it could end up being…In New York City, they didn’t know what they were going into, and that hit home.”

Linam’s perspective on 9/11 changed due to the climb. “I never really pictured firefighters on 9/11 having to climb the stairs, having to go up and up not knowing what would happen…I’ll never understand what was going through their heads, but [the climb] gave me a different view.”

Each participant in the climb wore a badge with the name and photo of a firefighter who died in the tragedy. The badges also had a small card with the name of the firefighter that the climbers put onto an accountability board at the top of the last flight. Prater likened the accountability board to the head count the firefighters do after working a fire, and the bell each climber rang as they finished to coming home.

“It’s so comforting, humbling, rewarding, and emotional too,” Prater said, “To know that when you put his name on the board, he’s home. It was like closure, like healing.”

O’Neal and Linam both remembered the name on the badges they wore: Ricardo Quinn and Steven Russell. They said they both went home and looked up information about the firefighters in whose memory they were climbing.

“I would do it again today if I had the chance,” Linam said of the event, and O’Neal agreed.

They were profoundly affected by the camaraderie of everyone involved. “Everyone going up, even a guy you’d never met before, was there to encourage you and make sure you made it. We were all there for the same reason.”