Once an Outlaw…Now an Author 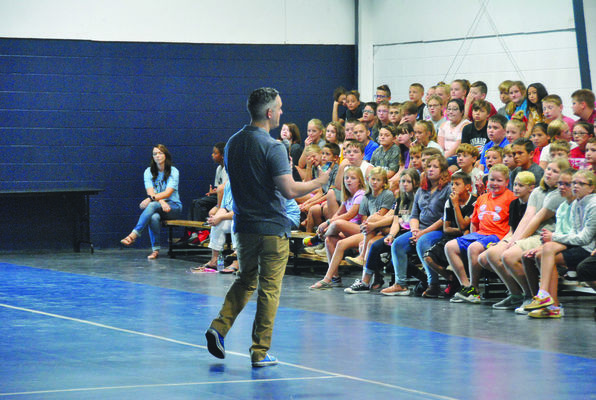 Author and illustrator Justin Dean visited area schools and Garland Smith Public Library last week with a message: it may take a while to find a great idea, but when you do, you have to be ready with the skills to make it happen. Dean created, wrote, and illustrated Awesome Dog 5000, an action-comedy juvenile fiction book featuring a team of video-game playing kids and their robotic dog.

His presentation to Marlow Elementary School students included an interactive video about his career and how he often tests out story and illustration ideas on his son to see if he thinks they’re “awesome.” He also described how he first started down the path to becoming a writer and illustrator. “I would draw pictures and my mom would make up stories about them,” he said.

Dean is a 1998 graduate of Marlow High School, and he credits several educators for preparing him for his career in multimedia, writing, and illustrating.

“The most notable was my high school speech teacher, Mrs. McConnell,” Dean said. “She was such an amazing teacher-coach-mentor-guru-role model, I can't really use enough titles to explain how she guided me to the path that I'm on today. A lot of the fundamentals of dramatic structure in writing I learned from her class, and how to be good, confident public speaker came directly from being part of her team in speech tournaments.”

He also cited the influence of his eighth-grade art teacher, Mr. Hooper. “It was the first real class I had ever taken in art instruction. The line work and shading techniques he taught me then I still use today.”

At his elementary school presentation, Dean was introduced by athletic director Kirk Harris, whom he credits for helping make Awesome Dog 5000 come to fruition. “Mr. Harris – or Coach Harris, as I knew him then – was my typing teacher. Without him, it would have taken me a lot longer to write the book,” he told students, to which they responded with peals of laughter.

Dean said he was also influenced by one member of the community in particular: his first boss. “Mr. Martin…used to own the grocery store in town. He was nice enough to give me my first real job sacking groceries,” Dean said. “The job was probably the biggest influence in my life because it gave me work ethic, responsibility, and most importantly money so I could go to the movies every weekend to watch and learn how great stories are made.”

Awesome Dog 5000 was listed as the Best Book of July for ages 6-8 on Amazon.com and Dean is already slated to release the second book in the series, Awesome Dog 5000 vs Mayor Bossypants in March of next year. During his visit to Marlow, however, Dean found an even greater payoff for his hard work. “It was such an awesome time to come home and share my experience as an author with all the kids both at the school and the library,” he said. “One of the most rewarding parts of this job is to help the next generation of young writers and artists. After I had done the presentation and then taught the creative writing class, several kids came up to me afterwards and showed off their own drawings, talked about stories they were working on, or would tell me that now they want to be an author too. To know I could inspire a kid in the same way so many teachers had done for me in the past is the best feeling in the world.”