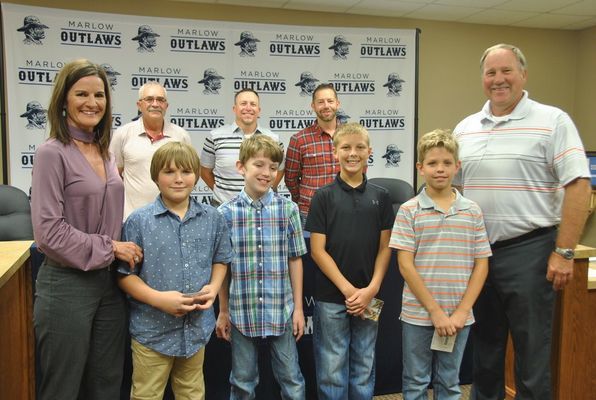 Superintendent George Coffman said that he was keeping an eye on new state laws that are going into effect November 1, as well as watching the economy to make sure that gross production and tax revenue are in line with the budget. “We’ll watch what we do and it’ll be fine,” Coffman said. “You look on the big picture…it starts showing some signs of maybe some negative budget economy coming, but I’m hoping they’re wrong, but we’re going to watch that pretty hard.”

Kizarr reported on activities at the Elementary school, including that the PTO fall fundraiser had over $49,000 in sales from which the school will profit $24,547, as well as $9538 in donations for a total of $34,085. She credited the PTO organization for how well they planned and worked to benefit the school. “They are amazing,” Kizarr said. “I don’t know the time that our teachers have been told ‘no.’”

Kizarr also talked about the attendance challenge that has been implemented for the school year. The grade-level winner gets a free recess, and the classroom with the highest attendance in that grade gets a trophy filled with treats. She said that the attendance percentages for each grade ranged from 95.06 to 97.35.

Coming up at the Elementary school are a field trip to the pumpkin patch, a Magician show as a reward for PTO fundraising, the PTO pie throw, and Duncan Little Theatre’s Children’s theatre production of “Aristocats” on October 24.

Marlow Middle School principal Ross Ridge reported that the recent book fair raised $3700 for the school, as well as an additional fundraiser that brought in $500. He also said that Red Ribbon Week is coming up and that Student Council planned to buy two tacos for each student on October 29, while they present a program called “Let’s Taco Bout Drugs,” including a video about the dangers of vaping.

The Student Council had also cleaned up the planters in front of the school, and were collecting donations for the Stephens County Humane Society’s annual Bark in the Park.

Ridge also reported on the successes of the cross country, football, and softball teams.

High School Principal Bryan Brantley’s report focused on organizations that don’t often get mentioned. He said first that the National Honor Society had 23 new members qualify on the basis of grade point average, community service, volunteering, and leadership. He also said that the Library Club currently has 26 members, and that they volunteer to read at the Elementary school a few times per year.

“We also have a math club,” Brantley said. “Every year for the past several they have been tutoring at the public library two days a week on Mondays and Wednesdays.” He said that the tutoring is primarily for third grade and up, but “anyone is welcome.”

The high school Student Council helped run a family carnival at Gregston’s Nursing Home and had done a “Random Act of Kindness” in September by helping a Duncan family clean up after a fire, as well as raised $122.59 by putting jars in classrooms to collect spare change for a classmate who was injured in an accident.

Looking ahead at the high school, Brantley said that the PSAT will be given to juniors who elected to do so on October 16 and that sophomores will take the Pre-ACT on October 31. High school cheerleaders have the OSSAA Game Day State Cheer competition on November 2 in Moore.

Marlow vocal music students will hold their first concert on Tuesday, October 15 and will perform the song that will be used to compete at the OSSAA Large Group contest.

Brantley reported that the Speech and Drama department had raised several thousand dollars hosting the Demonstration Day in September, with 27 schools bringing over 600 audience members to the school to learn about the different speech and drama events used in competition.

He also reported on student awards from the State Fair of Oklahoma, the Tulsa State Fair, and the Sheep Show.