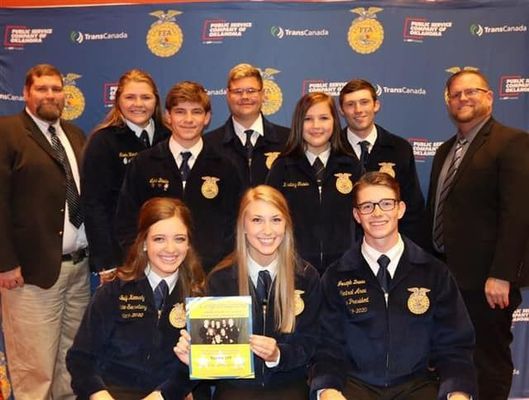 Marlow High School FFA students and officers will represent the program at the National Convention and Expo for the first time in decades as they travel to Indianapolis this week.

The competitive team, consisting of Luke Davis and Kaden Wilson and alumni Madison Baker and Erin McCaslin will represent Oklahoma in the Milk Quality and Products event. Baker is a freshman at OSU and McCaslin is a freshman at USAO. Only one team per event, per state are allowed to compete at Nationals.

“Marlow has not had a team compete at Nationals since the early 1980s,” said Marlow Ag teacher Jon Derek Mitchell. “A team competed at a national range contest in the 1990s but it was held in Oklahoma.”

In addition to the competitive team, the Marlow FFA officers – Alicia Moore, Nicole Cochran, Kristany Travis, and Ty Linam - will also go to Nationals. Davis and Wilson are also officers.

“My team and I placed third at State,” said Davis. “The two teams in front of us did not want to compete so we were next in line and jumped at the opportunity.”

Three Marlow alumni will also be honored at Nationals with the American FFA Degree: Kenzie Sellers, Graham Nunley, and Preston Nunley. “This is the highest level of membership for an FFA member,” Mitchell said. “They must have invested $7500 in their project and earned $10000 and have received the State FFA degree and have completed high school.” Among other requirements for the Degree are performing at least 50 hours of community service with at least three different activities, outside of the supervised ag experience hours, and have completed at least 3 years of ag education in high school or two years in high school and one full year in college, as well as maintained a “C” or better high school GPA.

The FFA’s official website reported that a record 4,353 FFA members will be recognized on stage at Nationals as American FFA Degree recipients.

The group traveled to Indianapolis on Wednesday; FFA Nationals continue through the end of the week.