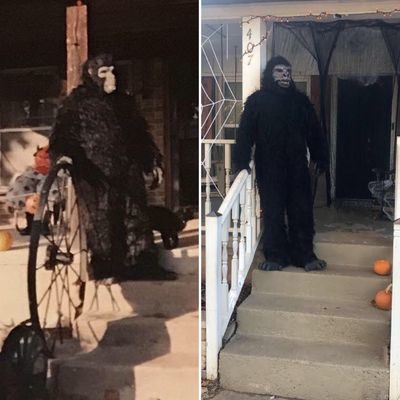 Marlow kids – and their parents - were treated to a blast from the past on Halloween night when Stephen Wilkerson and his family brought back a tradition that dates back to 1982: a gorilla on the front porch of their house.

Weldon “Ray” and JoAnn Iverson purchased the home at 407 North 5th Street in 1964. Ray first dressed up, initially as a mummy, for Halloween in 1977. The gorilla costume made its first appearance in 1982 after the Iversons purchased it in Duncan for $50.00. The gorilla greeted trick-or-treaters yearly until 2003, when they sold their home.

Wilkerson, the Iversons’ grandson, purchased the home at the end of 2018 and the family decided to bring back the tradition for Halloween this year. Wilkerson said that they had to purchase a new mask, feet, and hands, but the 37-year-old suit is the same.

“We’re excited to bring this tradition back in the exact house he started it in,” Wilkerson said. “We had a lot of visitors this year and hope to see it grow more and more each year.”