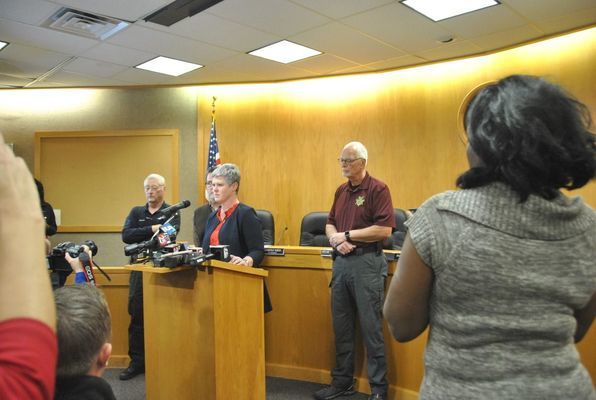 Stephens County residents were shaken today when the news of a shooting at the Walmart in Duncan spread throughout the community. Three people, including the shooter, were confirmed dead at the scene.

The report came in via a 911 call to Duncan Police Department and Duncan and Marlow schools were placed on lockdown almost immediately. The lockdowns were lifted once law enforcement confirmed that the shooter was not at large.

At a press conference earlier, Sheriff Wayne McKinney emphasized the importance of disseminating the correct information throughout the community.

“It’s a sad day for our small community,” McKinney said. “I can’t reiterate any more that getting the facts of this story out…with what actually happened, not speculation. All that does is panic our community.”

Duncan City Manager Kimberly Meek, speaking at the same press conference, said that it was “a sad day for Duncan.”

“I ask that everyone remember that the family is grieving and will be grieving for a while, and I ask that we give them as much privacy as we can,” Meek said. “Duncan is a wonderful city, and we will pull together, and we will take care of our own.”

First Baptist Church in Duncan announced this afternoon that the community is invited to a prayer service at 6pm this evening. Pastor Bryan Pain said that it would be a “focused time of prayer” that will include some songs. “It’s hosted by First Baptist, but several pastors in town are taking part in it,” Pain said. “It’s a come-as-you-are service and all are welcome to help heal.”