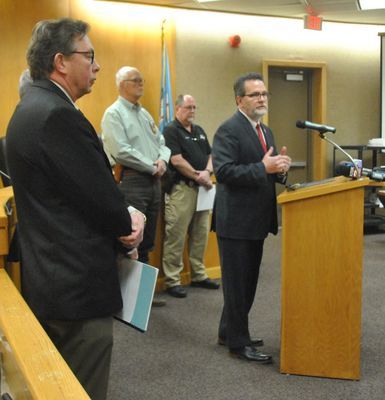 District Attorney Jason Hicks addresses the media at a press conference on Tuesday. 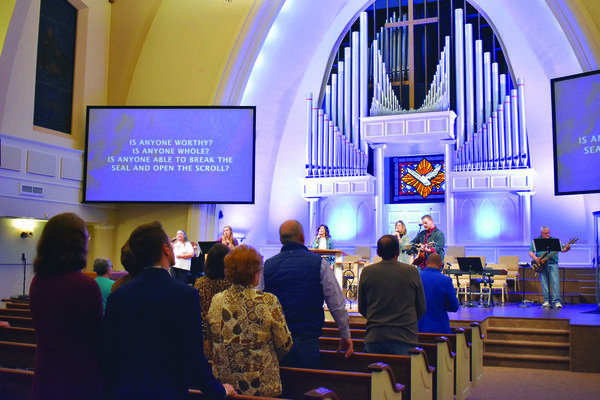 Photo by Linda Provost, courtesy of the Duncan Banner.
Previous Next

Stephens County District Attorney Jason Hicks began the press conference on Tuesday morning by expressing his appreciation for the actions of law enforcement in the moment. “Those guys went into that scene not knowing…if that was going to be their last day, if they were going to take their last breath as a result of what they saw there.

“What were those officers prepared to do?” Hicks continued. “Whatever they needed to do to stop that shooting in that particular moment. And that’s what this community should be proud of, the response of law enforcement was immediate and it was overwhelming. And it should send a signal that if you’re going to do something like this in our area, there’s going to be a response and law enforcement is going to take care of it.”

Hicks also expressed his gratitude for the multiple law enforcement agencies that were involved in the immediate aftermath of the shooting as well as in the ongoing investigation. Among those agencies were the Duncan Police Department, Stephens County Sheriff’s Office, Oklahoma Highway Patrol, members of the District 6 Violent Crime Investigators, Oklahoma State Bureau of Investigation, Federal Bureau of Investigations, and Oklahoma Bureau of Narcotics.

“We got phone calls from all over the state and all over the nation, expressing sorrow and asking us what we needed,” Hicks said. “It meant a lot to all of us.

“I also want to thank the community for the text messages, the phone calls, the emails and the support that they’ve shown of my office as well as all of these law enforcement officers…the community has reached out to us and said ‘We’re praying for you, and we’re there with you, and we support you.’”

Hicks closed his remarks by saying that he regrets that this happened in the community. “But we’re here and we will stand up,” he said. “This is our community and we will become stronger as a result of all this.”

Duncan City Manager Kimberly Meek echoed Hicks’s thanks to law enforcement and the community response, adding, “I’d like to thank Pastor [Bryan] Pain of the First Baptist Church for opening his church last night for a community prayer service. It gave us the chance to come together as a community and to leave our evening with renewed hope for today.

“In the wake of this tragedy we are left with devastated families and heartbroken friends,” Meek said. “And in this tight-knit community…you don’t have to look far to find somebody who has been impacted by this tragedy.”

At the press conference on Monday, Stephens County Sheriff Wayne McKinney emphasized the importance of accurate communication regarding the shooting. “It’s a sad day for our small community,” McKinney said. “I can’t reiterate any more that getting the facts of this story out…with what actually happened, not speculation. All that does is panic our community.”