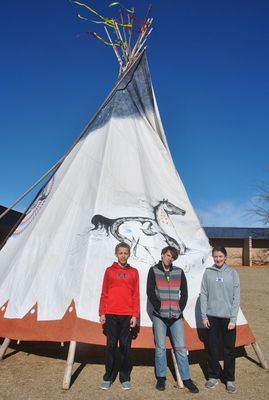 Marlow middle school students – and anyone driving down 9th Street on Tuesday – were treated to a unique sight: a 20-foot tall tepee on the school lawn in front of the cafeteria. The dwelling, owned by Middle School principal Ross Ridge, was part of a lesson for seventh-grade Language Arts students to celebrate Native American Heritage Month.

Haleigh Elroy, seventh-grade Language Arts teacher at Marlow Middle school, says that she “likes to get kids interested in something outside of the text,” so that they will be enthusiastic about writing. “I try to align the curriculum with other subjects so that whatever they’re interested in, they can organize their thoughts and communicate through writing.”

The goal was to get students interested in history by engaging them in a hands-on experience. The tepee was erected by Ridge during the first lesson period, with the assistance of the class. Subsequent classes were led outside to have class in the tepee, led by Ridge. “I give them a brief history of Oklahoma in 50 minutes,” Ridge said.

The lesson included how the tepee was constructed and what the symbols on the outside – hand-painted by Ridge – signified, such as constellations of stars and stylistic nods to different tribes with which Ridge is connected. “Oklahoma history has always been my favorite subject,” Ridge said.

Elroy included study of Native American history in her lessons during Native American Heritage Month, which is in November of each year. “We talked about Quanah Parker, and how he was a diplomat for his people. We also talked about Geronimo, and the fact that he was held at Fort Sill. So much of that history is right down the road.”

“There’s so much connection to Native American history right near us,” Ridge added. “Kids don’t know how close the history is.”

Elroy said she hoped that students would feel the connection to history when they had class inside the tepee, especially because the discussion was led by Ridge. “When kids see your passion for something, it’s contagious.”

The lesson included discussion of how the tepee design had evolved over time with the introduction of horses by Europeans, as well as the efficiency of construction and insulation. Ridge also talked about the social and political reasons why tribes were forced to migrate west and assimilate with white culture. Students were able to contribute to the discussion with information they’d learned throughout Native American Heritage month, including the effects of Manifest Destiny and propaganda that led to the Trail of Tears.

Elroy hopes the students will benefit from the immersive experience of having class in the tepee, and that it will help them write essays about it this week using writing prompts she provided prior to the class.

“Whether or not they are interested in history, they will definitely have something to write about,” she said.

“Something for Everyone” at Free Fair