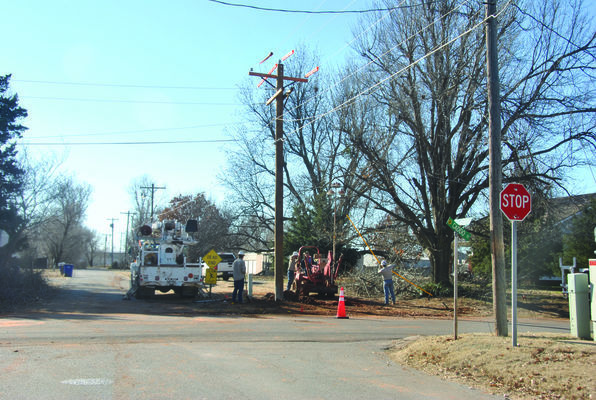 City of Marlow employees work to replace a power pole on 4th and Caddo Streets earlier this week, continuing the public improvements reported by the Review in 1906. Photo by Elizabeth Pitts-Hibbard

When the calendar page rolls over to another year, it’s human nature to reflect on the happenings of the past year. 2019 was another year of effort and forward motion looking to the future for this wonderful community we call home. Can we even imagine the progressive attitudes shown by our founding fathers as Oklahoma Territory and Indian Territory looked forward joining together to form the great state of Oklahoma in 1907?

Let’s see what they thought as their future was unfolding. From the January 4, 1907 Marlow Review: “NINETEEN HUNDRED SIX. How do you like it? It hasn’t been all you like?”
“It has been the best year in Marlow’s history. The greatest degree of improvement has been done that has been accomplished in one year of her history. Waterworks and electric lights constitute her public improvements. Five new brick business houses, a commodious opera house, a new eight stand gin, an elevator, some 60 residence houses with fifty residences improved and enlarged are a part of her private or individual improvement. Improvement in the way of better stocks of goods, some new business concerns and better facilities to perform its duties as a town are improvements also noted. Only one business failure has been noted, a grocery merchant trying to do too much business on a little capital.”

“No disasters or pestilences [sic] have visited the country in or around Marlow, the early freeze in its destruction of cotton being about the only condition much to our detriment. Marlow has sold goods and purchased farm products over a larger area this year than ever before. Nineteen hundred six has been a good year.”

“NINETEEN HUNDRED SEVEN. No unfavorable circumstance seems to confront us as we enter the new year, on the contrary everything points to a prosperous year. The wood reserve will be settled and much new land will be put into cultivation in the Chickasaw side of our territory. Present conditions do not indicate crop prospects but they are favorable for moisture for early planting and for small grain crops. Today lumber is being placed for two four-room cottages and one three-room cottage and everything indicates the continued growth of the town and the success of the people generally. Here’s hoping 1907 will be one of prosperity and happiness.”

Did these founding fathers take a breath and rest on their laurels? No. Here’s what a look back at the year held just two years later when we were at last Marlow, Oklahoma. From the December 31, 1909 Marlow Review: “A YEAR’S PROGRESS. During the year 1908 there has been expended a larger sum of money on substantial buildings and improvements in Marlow than in any year of her history. More costly and beautiful residences and more improvements of those already built were added than ever before in an equal period.”

“While only three new brick buildings have been built in the business district two have been enlarged to two stories high and two concrete block buildings have been constructed. We expected to and should have had a new elevator built – it will be built next year. We have a new school building for which the town will pay — extras added — about forty thousand dollars.”

“We lost the Acme Cement Plaster Co.’s plant but it is now believed they will rebuild very soon and double the capacity of the mill. It has been a year of progress and ends with the outlook for the future the brightest yet experienced by both town and country population.”