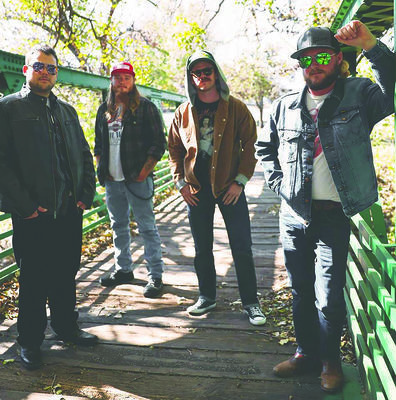 Wildhorse Revenant are Jack Tidwell, Lindall Davis, Erik Davis, and Hunter Cook. The band’s debut album, “Star Forty-Six,” will be released on Friday with a live show at Wall Street Bar in Duncan.

Wildhorse Revenant, a band with roots in Stephens County, will release their first album on Friday with a live performance and release party at Wall Street Bar in Duncan. The group was one of the opening acts at the 2019 July 4 celebration at Red Bud Park and has since performed throughout the area, including opening engagements for Chance Anderson Band and headlining performances across the state.

Lead singer Jack Tidwell is a 2013 graduate of Marlow High School. Tidwell said that growing up in Marlow had a lasting influence on the band’s music.

“I played a lot of bluegrass music when I was growing up here,” Tidwell said. “I started writing songs when I was in high school. Matter of fact, three of the songs on the album were written when I was still at Marlow.”

Wildhorse Revenant has been together since 2017 and started working on the album, called Star Forty-Six, in February of 2019. The band has released three singles from the album, most recently “Stephens County Blues” on January 3. Previously-released singles are “Heaven Knows” and “Back Out on the Road Again.”

Tidwell said that the band chose to have the release party in Stephens County because they have a large fan base here. “Our Stephens County fans brought us to where we are,” he said. “We wanted to bring them in to have a big party.”

The band plans to tour after the album is released. “2020 is going to be a significant year for us,” Tidwell said.

Local artist Jessica Farmer will open the live show on Friday, and the band will have copies of the album for sale. The album will also be available on streaming sites like Spotify, iTunes, and Apple Music.

Tickets for the show are available at wildhorse-revenant.ticketleap.com or at the door.