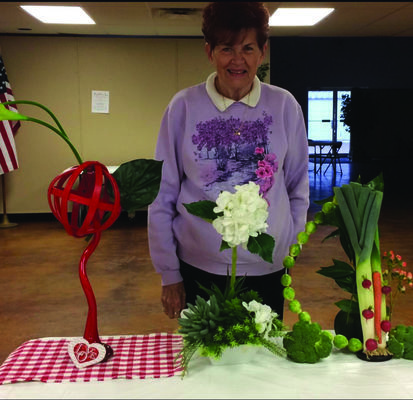 PATIO MEETS: At a recent Patio Garden Club meeting, Mrs. Shirley Johnston, shown above, created three floral designs that can be useful in a dining room or kitchen display.

Members of the local Marlow Patio Garden Club began their new year with a meeting held on Jan. 9, at 1 p.m. in the Conway Fellowship Hall of the Catholic Church, located on North 4th St.
President Bettie Cooper called the meeting to order and for the opening devotional attendees read the Gardeners Creed, Club Collect and the Conservation Pledge in unison.
Those present were Dina Atnip, Bettie Cooper, Judy Glover, Judy Hawkins, Joyce Hodges, and Jackie Neely.
After the Treasurers report by Mrs. Atnip, Mrs. Cooper reported that Father Victor had received the club’s Christmas donation and it will be used to help build a much needed church in his area. She also let members know that the donation to Penny Pines in honor of Mrs. Shirley Gee, who passed away in March of 2019, had been received and the family was very thankful for the memorial in her name.
Patio Garden Club is a member of National Garden Clubs, Inc. and along with the national group is concerned about climate change. Mrs. Cooper shared information from the National Gardner magazine (Winter 2020, Vol. 91, No. 1), about carbon sequestration: Carbon sequestration is the process involved in carbon capture and the long-term storage of atmospheric carbon dioxide, or other forms of carbon, to mitigate or defer global warming. It is a way to slow the atmospheric and marine accumulation of greenhouse gases released by burning fossil fuel.
A recent study using Google Earth mapping published in “Science Magazine” concluded, “There is enough space globally to plant more than a trillion trees without interfering with existing farmland or cities…an area of trees about the size of the United States could scrub 205 billion metric tons of carbon from the atmosphere…out of the roughly 300 billion metric tons of man-made carbo pollution produced over the past 25 years.
“To deter this process, the national club is encouraging all garden clubs to plant trees,” Mrs. Cooper said, “and the theme of this effort is entitled “Each One Plant One.” At the next meeting, the group will discuss a project which includes planting trees.

Program for the day was given by Shirley Johnston of the Dahlia Garden Club in Walters. Mrs. Johnston, who is a National Garden Club Flower Show Judge, gave a lesson entitled “Designs with a Flair.”

Using her experience as a floral designer, Mrs. Johnson made three different designs using various vegetables found in our gardens and even our refrigerators. The most unique design consisted of Brussel sprouts, broccoli, radishes, hearty green onions and a few fresh flowers. Other designs were created from beautiful flowers and unique art pieces.

“These designs gave us lots of tips on how to soak wet foam, the use of glue dots in arrangements and the ability to use vegetables in table arrangements,” Mrs. Cooper added.

The next meeting scheduled for Patio will be held on Feb. 13, at 1 p.m. at the Catholic Church. The group will be making wreaths out of pool noodles.

Other upcoming events include: on April 9th, the club will have a field trip to the Medicine Park Aquarium; the State Convention will be held in Atoka on May 1 & 2; and the local club will be hosting the South Central District Spring Convention on May 7th in Marlow.