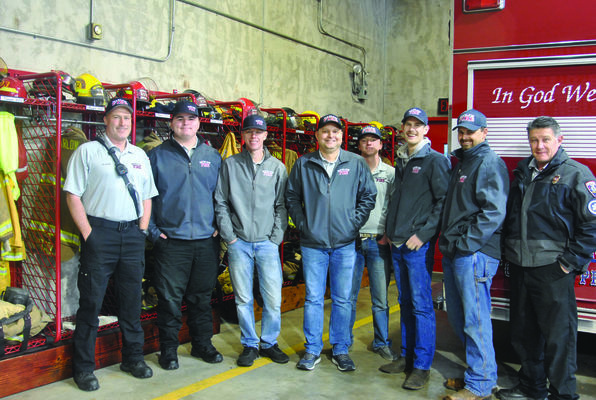 A Place for Everything: Firefighters Shane Linam, Jakob Herriage, Alex Barker, Adam James, Dayton O’Neal, James Bourke, Eric Spurlock, and Michael Pope show off new gear racks that were recently installed thanks to a gift from an anonymous donor. Photo by Elizabeth Pitts-Hibbard

The Marlow Fire Firefighters’ Association, the charitable organization for Marlow Fire Department, has already benefited from donations so far this winter, ranging from equipment racks to renovations on a training facility.

The largest such donation – several thousand dollars – was given recently by an anonymous donor and provided a much-needed storage system that will not only help response time but also extend the life of the firefighters’ gear.

Previously, first responders would store gear (helmets, boots, pants, jackets) on wood racks that didn’t allow for organization or air flow, posing multiple challenges during and after a call.

“It was organized chaos,” said Captain Don Hamer of the process the firefighters would go through to get gear on and respond to a call. “And then when you got back, if things were wet, they didn’t have anyplace to drip or for the air to circulate.”

The solution was to install coated wire racks that allowed each firefighter space to store gear. “Everyone’s got their own slot,” Hamer said. “There’s room for 25 sets of gear to be stored, and everything has room to circulate so that it dries in between calls.”

The installation has also provided enough room for the firefighters to hang their gear uniformly in each space so that the American flag on the jacket shoulder is always displayed when hung up.

The Firefighters’ Association also received a contribution from Delta Sigma to assist in renovating the building across the street that once housed the VFW. Hamer said that they would like to put up a smart board and projector, as well as get internet access at the building for their training classes on the second and fourth Thursdays of each month.

Another donation received so far this year came from Anheuser Busch, but the firefighters are quick to assure the community that the 96 cases of cans – an entire pallet – are full of water, which the brewing company produces for a few months a year in order to donate to first responders. The opportunity to apply for the donation was shared on social media in July, and Marlow Fire Department received the delivery on January 2.

Perhaps the most delicious donation of 2020 is one from Family Dollar, which is currently running a promotion that if a customer buys a soda and a Snickers bar, the store donates another Snickers to the Firefighters’ Association. “At least you know when we’re over here working we’re not going hungry,” Hamer joked.