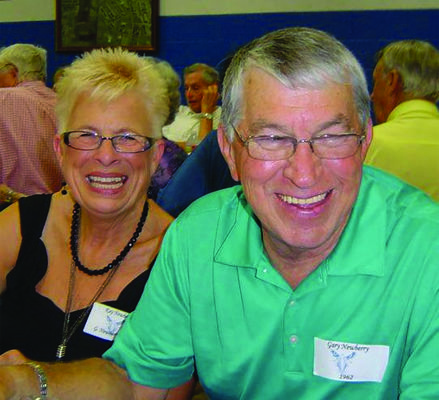 Longtime Marlow business owner, resident, and community leader Gary Newberry was no stranger to anyone in Marlow, from the time he began work at Jack Graves’s pharmacy nearly 50 years ago until he passed on Monday after a long illness. “Everyone talks about Gary the Pharmacist, Gary the Coach, Gary the Community Leader,” Chamber of Commerce director Debbe Ridley said of Newberry’s role in the community. “He was different things to different people, but he influenced this entire community.”

City Administrator Jason McPherson grew up among the Newberrys’ businesses; his mother worked for Gary’s wife Kay Newberry for many years and McPherson recalls the example of service that Gary Newberry set.

“I remember my dad and I were refereeing basketball together, and we were headed to Anadarko for some games,” McPherson remembers. “My dad needed something so we stopped at the Walmart pharmacy on the way out of town. Gary came out from behind the counter and asked what dad needed; he made sure my dad found what he needed and went and grabbed a snack as well so he could take his medicine with food.

“I just remember that as the level of service Gary always gave,” McPherson said. “He was not only there on a Saturday, but he came out from behind the counter to help. He met customers where they were.”

Gary Newberry carried that level of service all the way to the playing field as well, coaching his children’s sports teams and building relationships with the families of the kids he coached.

“Our two families were so involved when our kids were young,” said Ridley. “We got to watch each other’s kids grow up, but Gary had a lot to teach those young people.”

Ridley fondly remembers not only the coaching lessons Newberry gave, but also the life lessons he imparted. “He taught them ethics. Work habits. How to be kind,” she said. “The way he looked after customers is how he taught those kids to look after their teammates and everyone else in their lives.”

Gary Newberry was a fixture at Marlow sporting events, even when his illness prevented him from sitting in the stands. He could often be seen shouting encouragement from a comfortable seat on the basketball floor, mat-side at a wrestling match, or taking in a football game while sitting in his car on the sidelines.

“When you think of the Marlow Outlaws,” Ridley said, “you have to think of Gary and Kay.”

What also stands out to those who knew Newberry was the fact that he and Kay didn’t grow up in Marlow. “They chose to live here,” Ridley said. “They chose Marlow as their community, and they made Marlow their family.”

The Newberrys made a home for themselves and their family among the people of Marlow, and carved out a place for their children and grandchildren – as well as members of the community – to thrive.

Employees of Newberry’s pharmacy feel like Gary cultivated close relationships within the staff as well. They speak of Gary as the patriarch of a family business that made everyone feel important.

“When I think of Gary,” McPherson said, “I think of how much he loved Marlow…at the heart of it all, he wanted to do what he thought was best for this community.”

Even into retirement, Newberry continued to set community improvement goals. He purchased properties and built homes; he was particularly proud of the newly-renovated Marlow Event Center that he hoped would be the site of many celebrations to come.

One thing he strove for in recent years was the assurance of a legacy, perhaps not realizing that his legacy had already been secured through his work in the community.

Ridley said that everyone in Marlow can work to be more like Gary Newberry. “Be community supporters,” she said. “Be ‘boosters’ of all things Marlow, be a positive influence and have a positive outlook.”

“He leaves a mark we can all strive for,” McPherson said. “If we all had a passion for the community we live in like Gary had, this world would be a better place.”