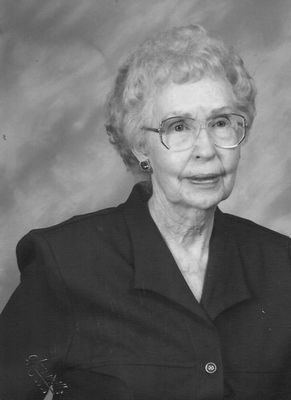 Fannie Mae (Frances) Cranford, formerly of Pryor, passed away on Tuesday, March 17, 2020 in Tulsa at the age of 98. A memorial service in her honor will be held at a future date. Arrangements are under the direction of Stephens-Key Funeral and Cremation Care in Pryor. Online condolences can be made at www.stephens-key.com or on the Stephens-Key Facebook page.

Frances was born on December 2, 1921 in Martha, Oklahoma to Cooley Austin & Bertha Mae Lamb. She was born at home with the country doctor coming by horse & buggy to help in the birth. When she applied for her birth certificate 18 years later she discovered that the doctor had written the name Fannie Mae instead of Frances Mae on the birth certificate. Everyone knew her as Frances but her legal name was Fannie which caused confusion for the rest of her life.

Her father was a ranch manager and they moved several times during the depression days but the family of 3 brothers and 1 sister worked, played tricks and pranks on each other and she grew in a loving home.

Frances graduated from Lawton High School in May 1940 and soon joined her family in Paducah, Texas. While working in the cotton fields she met the tall curly headed man Coy Cranford that become the love of her life. They were married November 9, 1940 and were married over 49 years before Coy’s passing to Glory in 1990.

On Veterans Day November 11, 1941 they were blessed with a beautiful baby girl, Priscilla Anne Cranford. A few weeks later Pearl Harbor was bombed and life changed for the young couple. The area was one of the largest cotton producing areas and the government needed the cotton for uniforms and asked the area farmers to plant more cotton. They worked together in the cotton fields during the growing season and drove to California to work in the airplane factories during off season. Mom was truly the face of “Rosie the Riveter”. Dad did join the Army and served in the Tank Destroyer Unit under General Bradley. As the men were overseas fighting for freedom, the women in the family supported each other as they raised their children together and comforted each other when learning of a lost.

After the war they were blessed with a second daughter Coya Cranford. They made their loving home in Texas, Wichita, Kansas, & Flippin, Arkansas. They were instrumental in starting small churches where ever they lived. After retirement they returned to the Marlow Oklahoma area and was one of 6 couples that built Lakeview Baptist Church.

They hosted many family reunions and Frances always had food, & games ready.

After Coy’s death, Frances moved to Owasso Baptist Retirement Center to be close to daughters and grandchildren. She was a social butterfly and the domino queen at the Center. In 2009 she was honored by First Baptist Church Owasso for their first “Volunteer of the Year Award” for her service in VBS, Choir, cooking at Falls Creek, Sunday School teacher, and work on committees. She said she was just doing what the good Lord led her to do.

In 2014 she moved to Avondale Assisted Living in Pryor and in November 2019 moved to live with her daughter Priscilla in Tulsa.

City of Marlow to follow State mandates for COV...

Distance Learning Plans May Begin April 6 for A...