Marlow honored for electric achievement in enhancement and safety 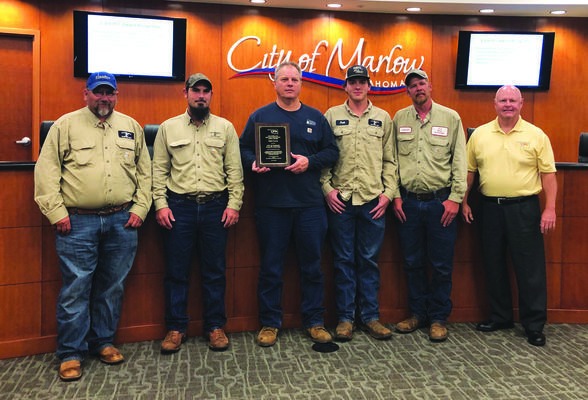 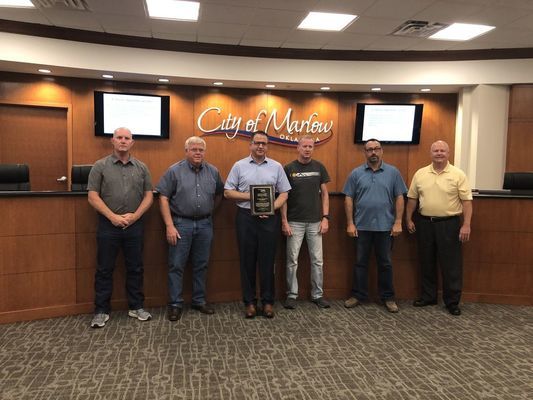 The City of Marlow, and its power authority, the Marlow Municipal Authority, received two honors at its regular meeting of the city council and authority trustees Tuesday night.

The Fulkerson Award recognizes an OMA member that has distinguished itself for its exemplary system enhancement, improvement, reliability or other innovative efforts to improve municipal power in Oklahoma. The award is named after Ponca City’s long-time utility director.

Beginning in 2014, the Marlow Municipal Authority undertook a long-term commitment to improve its electric system. The commitment includes doubling electric capacity by installing an additional transformer in its substation, establishing a vegetation management program to improve and maintain reliability, and install an automated metering system to streamline operations and improve customer service and confidence.

“Since 2014, the city has invested over $5 million in the electric infrastructure to improve reliability, stabilize rising costs and to better serve the citizens of Marlow,” said Mayor Brian Davis. “I am proud of the work that the city’s electric department and utility billing staff have done.”

The Howland Award recognizes safety in electric operations. It is named after long-time Duncan utility director, Don Howland. This is Marlow’s fifth time to receive the award. The previous awards came in 2017, 2016, 2015 and 2008.

In April, Marlow Electric was recognized for their safety record for 2019 by the American Public Power Association as well.