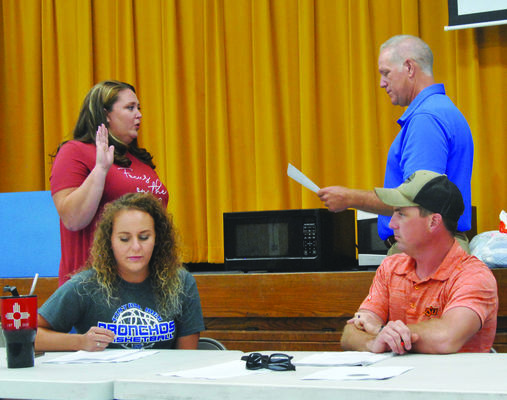 Central High school board members Courtney Barton and Cooper McCarley look on as Cassie McKinley is sworn in for Board seat #5 by Superintendent Kevin Dyes.

The first Central High Public School board meeting with Superintendent Kevin Dyes covered a lot of ground, including swearing in a new board member, electing officers, discussing financ-es, and reviewing the survey recently issued to parents regarding returning to school in August.

Cassie McKinney was sworn in to seat #5, after which officer nominations were voted upon with Lori Bethune assuming the role of president, Tony Scott the vice-president, and Cooper McCarley as clerk.

The consent agenda included renewals of leases and lease-purchases, including:

• The roof of the Pre-K building;

Dyes pointed out that the leases are paid via the General Fund, not school bond funds, which affects the availability of funds for school operations. He also said that not financing those items would save approximately $12,000 per year in interest. Dyes suggested that the board consider whether a portion of the recent insurance settlement for water damage could be used to eliminate some of the leases.

Of particular note to the community members, faculty, and students present at the meeting was the review of the recent parent and staff survey regarding school reopening. Dyes said that the school had received 250 responses to the survey.

The survey also showed that 12% of households did not have electronic devices available during the final 9 weeks of the 2019-2020 school year, when the school was closed.

Asked whether they were in favor or opposed to school reopening with precautions in place, 40% of respondents “strongly favored” reopening and 36% said they “favored somewhat.” Ten percent were “strongly opposed.”

Dyes said that he believed the school had enough devices for the students whose parents did not want them to return to the classroom, and that more were being ordered using grant money the district had received. He suggested offering a “purely virtual” option for those families in order to retain students and maintain a consistent curriculum in and out of the classroom.