by The Marlow Review Staff 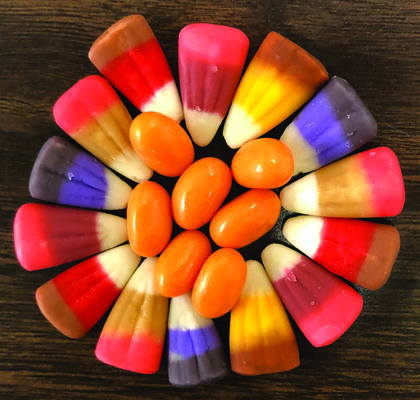 Ah, Autumn. The breeze suddenly has a bit of cool behind it, the sunset comes just a little earlier each day, and grocery store shelves are full of Halloween candy. Lately the trend with candy manufacturers has been to put new twists on old classics, and after the staff of The Marlow Review received a variety of such treats, it seemed impossible to resist doing a taste-test.

The sweets in question were controversial at the outset: candy corn, an old favorite that has recently regained popularity and carries with it the momentum of new flavors this year. Specifically, the staff was invited to try Apple Cider, Pumpkin Spice, Caramel Apple, and Blackberry Cobbler flavors. A bonus was included in the gift as well: pumpkin spice jellybeans.

Harper Pitts: It’s like a Bath and Body Works shop.

Faith Leatherman: I’m not really a fan of pumpkin spice flavor and this isn’t helping.

Elizabeth Pitts-Hibbard: This is the most stereotypical pumpkin spice…like if they took one of those photos off of Instagram and made it a flavor.

CM: I kind of liked it. It’s stuck in my teeth and I keep tasting it.

HP: This is very cinnamon-y.

FL: It’s a lot of cinnamon.

CM: I got a little apple at the end.

EPH: Like red hots or Big Red gum. It’s not terrible, but it’s like if you made some really weak apple cider and put red hots in it.

FL: I don’t taste pumpkin spice at all. It’s like regular candy corn.

CM: It tastes brown, though.

EFP: It does. It’s aggressively brown. Like cinnamon and nutmeg and wax.

CM: Kind of like a chai tea, but not all the good stuff. Mostly just the rough…

EFP: Like when you get a chai tea latte and you get to the bottom and there’s like silt in there.

HP: This is a rough taste-test, I gotta say.

FL: I’m holding out hope for the blackberry cobbler, though.

[The staff took a short break while everyone got water.]

HP: All I can taste is the sanitizer on my hands. [Pause] Okay, now I’m getting the apple. It kind of tastes like those caramel apple suckers.

EPH: I think this tastes the closest to what it’s supposed to be.

CM: The apple has a quite weird “whang” right now, I don’t know what else to call it.

EPH: Like if they created apple flavor in a lab. Which they did, but you can really tell. Vaguely apple-scented wax.

HP: If I had to make a candle out of any candies, it would be these. And it would kind of work, I think.

FL: Oh, I’ve been waiting for this one.

CM: Now I’m nervous for her.

EPH: This is dusty on the outside because of how much sugar.

[General exclamations of confusion and surprise from all participants]

EPH: That is…grapety-grape. It tastes like that purple hairspray smells.

HP: I think there’s a yogurt flavor like this.

FL: This is the best so far but it’s not blackberry cobbler.

CM: It reminds me of Willy Wonka when that Oompa Loompa turns into a blueberry.

EPH: The level of grapeness is astonishing.

HP: This one has the best color.

EPH: Yeah, I’d wear a turtleneck that was striped like this if I had one.

FL: I think if I eat any more sweet stuff after this, I’m done.

CM: I like this one. This is the winner.

HP: Yeah, this is the best.

EPH: By far the best.

FL: I think we have to rank them, right? Because the jellybeans need to go on the bottom.

EPH: I think of these, I think we would only recommend the cherry cola and the blackberry cobbler, is what I’m hearing.

EPH: Because any of the others are just not worth what you’re doing to yourself if you eat them. But the cherry cola, if I were at a party and there was a bowl of them…

FL: I’d take the whole bowl and just walk around with it.