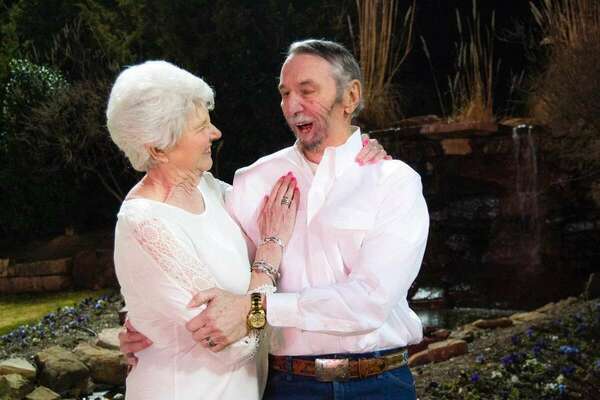 NOTE: As we continue with our article on Johnie Mac Mayes, we now delve into the life of his wife, the former Linda Riley, and the roads traveled that led to their amazing love story.

Born in 1945, Linda grew up in Marlow. She was raised by her great-grandfather Jim (J.H.) Willis and his daughters, Cecile (Willis) Davis, who is Linda’s grandmother, and Ola Mae Willis.

Life back then was simple. Folks enjoyed gathering downtown in Marlow to visit, to shop, to visit and…did I say to visit?

“We lived on South 6th Street, which was close to the schools and to town,” Linda said. “We didn’t have a car so I rode my bicycle everywhere.”

According to Linda, the Willis family truly left their “mark” on Marlow’s downtown area.

“My great-grandfather Jim built the stone building that still stands on the NE corner of Broadway and Main Streets,” she explained. “And he and his brother David, also known as Dink, carried stones from Hell Creek that were used to construct the original Bank of Marlow. They also worked alongside others to build the First Methodist Church located on West Main Street.”

Linda recalls when she would spend time at her Aunt Ola Mae’s beauty shop which was located on the second floor balcony of Hogan’s Department Store. It was a local gathering place, especially on Saturdays.

“I’ll never forget the smells that drifted from the beauty shop all over the department store,” she laughingly said. “Ola Mae had a permanent wave machine. The combination of the chemical mixture used to make a lady’s hair curl and the hot metal rollers…..well, I can tell you it was not good!”

While reminiscing about her school days, she said she understood how fortunate she was to attend Marlow schools.

“It was only later in life that I realized the educational opportunities afforded me at Marlow were exceptional,” she said.

A self-proclaimed shy, awkward, tongue-tied teenager, Linda had only praise for her speech teacher, Mr. Loafman, who helped mold her into a confident, composed speaker; Mrs. Millwee, her typing teacher’s skillful training is still very useful in today’s technical world; Mrs. White taught math and that knowledge has been put to use all of her life; but, it is Mrs. Reba Wortham, the home economics teacher, who put her on a path that would bring comfort into the lives of so many people.

“Mrs. Wortham really made an impact on my life,” Linda said. “The sewing skills she helped me develop, along with learning to design and make my own clothing is how I had the confidence and ability to create the PEGaRoo® shirt for Johnie.”

Johnie was diagnosed with cancer in 2006. After meeting each other in 2007, Johnie and Linda both knew that something was rekindled and though they had been apart for many years, the past came back to life for them. The love they had enjoyed in their younger years was steadily growing as they shared more time together. Johnie lived in Dallas, Linda in Oklahoma City, but it wasn’t long before they knew their lives were meant to be shared together.

“We began by rehashing memories of our high school days and dating,” she said. “I was a shy, skinny girl and secretly had a crush on Johnie. I was only a sophomore at the time and he was a very popular senior and star athlete.

“The summer before my senior year, we began dating. But after a season, life took both of us down different paths until 2007 when we met and all those feelings returned. It was no longer a “young girl’s crush” for me,” Linda said with a smile.

Married in 2014, Johnie and Linda were able to travel for a few years before the effects of the radiation used to treat the tonsil cancer started to destroy the blood vessels and bone tissue in his jaw. On a liquid diet for several years, he began to have trouble swallowing and would aspirate fluid into his lungs causing pneumonia, which required hospital stays. Thus, the need for a feeding tube presented itself and has become a way of life for him.

“Johnie has a plate on one side of his face but they can’t attach one to the other side because of bone loss, so the PEG (Percutaneous Endoscopic Gastrostomy) tube was necessary to sustain his intake of food,” she said.

“The tube is passed into his stomach through his abdominal wall to provide a means of feeding him because oral intake was not adequate,” she explained.

A common problem most people experience with the PEG tube is the disconnection or pulling out of the tube which requires numerous trips to the emergency room to get the tube put back into the abdomen.

Linda commented that having the tube became a stress trigger for John.

“He was so concerned about the tube accidently coming out or getting tangled in clothing that he couldn’t sleep or enjoy even simple activities. After two trips to the ER to get the tube replaced, I decided there has to be a way to prevent this from happening,” she said.

Linda’s love and devotion for Johnie and the desire to make life better for him stirred her past experiences as a seamstress with design skills, giving her the confidence and ability to create the PEGaRoo shirt.

“When I asked medical professionals what could be done to prevent the tube from being pulled out, I was told to use tape or a stiff wrap that literally caused Johnie to be in great pain. That’s when I knew I had to try to figure out another way,” she added.

‘My goal was to make day to day activities as normal as possible for him or anyone else with a feeding tube – thus my PEGaRoo brand of shirt came to life,” she said humbly. “We have applied for a patent and have been granted a Registered Trademark on our name and Logo.”

The PEGaRoo shirt is a simple design but a masterful creation because it is designed to “hold” the PEG tube in a pocket instead of just hanging down loosely through the clothing being worn. A convenient pocket is on the front of each garment with a small opening behind the pocket for the tube to slip through and then lay inside the pocket.

According to Linda, the shirt provides a comfortable and secure solution to “what do I do with this thing?”

“When designing the label, we wanted to not only help adults but children too,” Linda said. “Anyone experiencing difficulty with a PEG tube can go to our website for more information. There is also a video of John and I that gives in-depth details of our journey.”

It is with great joy, for this writer, to tell you that our Knight in Shining Armor (Johnie) is cancer free today, and even though life still throws them curves every once in a while, the two truly believe their love for each other was meant to be.

According to Linda, “Every person is born with half a “flame.” They spend their lives searching for the other half of their flame. We are blessed to complete each other.”

And that, dear readers, is the rest of their story.