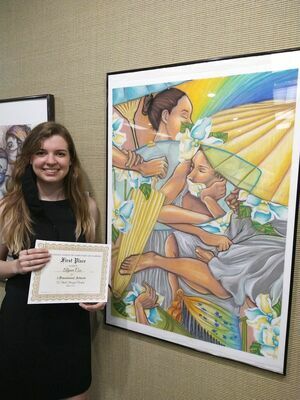 Cameron student Alyssa Cox displays her first-place award in the Two Dimensional Art category of the Cameron University Student Art Competition alongside her winning pastel, “A Stroll through Paradise.” Cox is a 2018 graduate of Marlow High School.

The Cameron University Department of Art, Music and Theatre Arts has announced the winners of its second annual Student Art Competition. The honorees were selected by Elizabeth Yarosz-Ash, retired Professor of Art at Midwestern State University.

“The annual student exhibition contains work by artists that I want to congratulate for having the courage to make artwork and to exhibit during a worldwide pandemic,” Yarosz-Ash said. “The instructors are to be commended as well. It is obvious that their teaching is making an important impact on their students and they should be gratified by the impressive results. Jurying this show and selecting the award winners was definitely great fun. It was an honor that I thoroughly enjoyed.”

The exhibition will be on display at CU’s Art Teaching Gallery, located in the Art Building, through May 7.

Yarosz-Ash noted, “The gallery space is beautifully suited to an exhibition of this nature, as it is adjacent to the working studios. As a showcase for a program, it functions as the consummate instrument of a teaching/learning environment presented for examination. There were more than a few delightful revelations when viewing the abundance of work.”

Duncan’s Alyssa Cox was honored with the first place award in the Two Dimensional Art category for her pastel, “A Stroll Through Paradise.” Monica Monsanto, also of Duncan, earned second place with her charcoal work, “Picture of the Observed.” Third place was awarded to Kanney Do of Lawton for the charcoal “David.”

Other winners in Three Dimensional Art were Lawtonian Jasmin Marino, whose “Medusa” earned second place. The piece is a work of mixed media, consisting of leather, yard, rush pen, gouache, and gloss spray. Desiree McManus of Oklahoma City claimed third place with “The Kitsune Mask,” made of paper mache and acrylic paint.

Honorable mention awards were presented to Michele Pierce of Frederick for “Lurker,” a watercolor; Lauryl Dawn Russell of Lawton for “Dawning of the Veiled,” created in charcoal; and Jessica Hilsabeck of Lawton for the watercolor “Deciduous.”