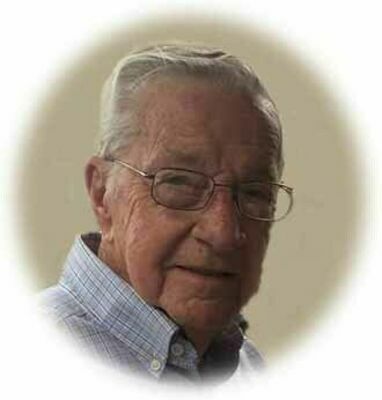 Funeral services will be held at 2:00 PM, Wednesday, July 14, 2021, at the Callaway-Smith-Cobb Funeral Home, with Rev. Terra Sisco officiating.
Burial will be in the Marlow Cemetery under the direction of Callaway-Smith-Cobb Funeral and Cremation Services in Marlow. On Valentine’s Day 1928, Myrtle Renfrow expected chocolates. Instead, she welcomed the arrival of a baby boy, Bill Edward Renfrow. Bill was born

father-in-law, brother, husband and Grandad. Attending school in his early years in Marlow, OK, Bill graduated high school in 1946. At school, he was active in sports, played the coronet in the

band and was on the high school honor roll for 3 years. Bill began his college studies at Central State College (UCO) until 1950, when he entered the US Army and fought in the Korean War with the 45 th Infantry Division. He earned the rank of Sergeant and was awarded the

Combat Infantry Badge and the Bronze Star. Upon discharge, he returned

to his college studies and married the love of his life, Dolores “Dee”

Renfrow. He earned his degree in Accounting and began his 35-year career with

Conoco. Upon retirement, he was Division Administrative Manager of the

Mid-Continent area, living in Midland, TX. Bill and Dee traveled the world in their retirement. They loved cruising and visiting their granddaughters, son and daughter-in-law in Germany.

They also enjoyed attending the many activities of their grandsons. He was preceded in death by his parents; wife, Dee and an infant older brother, Gene Leonard Renfrow. He is survived by children Paul (Karen) Renfrow of OKC and Jon (Jennifer Herrin) Renfrow of New Market, Suffolk, UK; grandchildren Heath (Evan Jacquelyn Smiley) of Milwaukie, OR, Kyle of Edmond, OK, Susana (Killian Korth) of Grand Junction, CO, Benjamin of Norman, OK, Phoebe and Lucy of Fort Collins, CO. A brother, Bob Renfrow of Heavener, also survives him. Online condolences may be made to www.CallawaySmithCobb.com

Bronchos Even for Season after Loss to Ryan

Column: From the Desk of Sen. Jessica Garvin