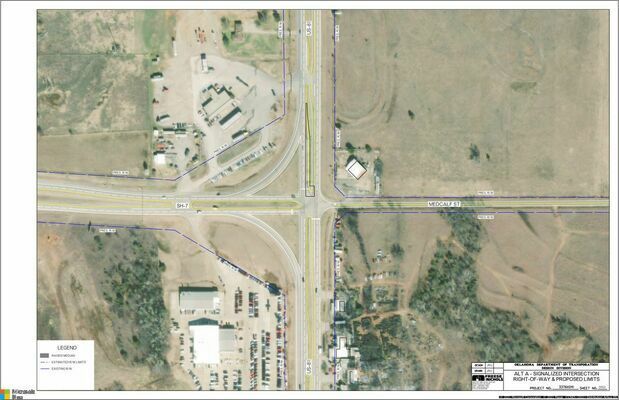 One of the alternatives proposed by ODOT to improve traffic flow at the intersection of US-81 and SH-7 between Marlow and Duncan would install a traffic signal. Other alternatives may be viewed at www.odot.org/US81SH7Junction.

The Oklahoma Department of Transportation (ODOT) is presenting a virtual open house in order to provide information and collect public comments on proposed improvements to the intersection of US Highway 81 and State Highway 7 between Marlow and Duncan, commonly known as “The Y.”

“The intersection has traffic safety and operational issues, including increasing traffic volumes and the need for improved left turns,” according to the information provided by ODOT.

The virtual open house, which is accessible via ODOT’s website: www.odot.org/US81SH7Junction, will allow members of the public to view an interactive map of the area and design proposals for the intersection. The public may also give feedback on the proposals. The virtual open house is available online through December 1, 2021.

Three intersection designs are being offered for public input.

Alternative A proposes changing the intersection to be controlled by a traffic signal. New signal equipment would be installed with additional signage to provide notification of the signal in all directions.

Alternative B includes a displaced left turn for eastbound vehicles turning northbound at the intersection and a stop control for east- and westbound traffic.

Alternative C creates a multi-lane roundabout at the intersection.

According to ODOT, construction at the intersection is scheduled for bid in Federal fiscal year 2026. If the design selected requires right-of-way acquisition and utility relocation, the work would begin in 2023.

Burn Ban in Effect for County