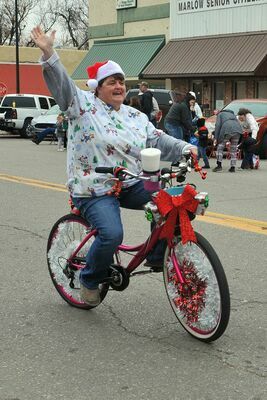 One constant around here on the first Saturday in December is an outstanding Marlow Christmas parade! Thanks to each and every one of you from the Marlow Chamber of Commerce -- whether you volunteered to make it happen or came out to watch and cheer it on! Perfect weather for a Christmas Parade, and a wonderful way to "officially" begin the Christmas season in Marlow!

Another constant for most of us, by the second week in December most of us probably have a Christmas tree gussied up and twinkling, waiting for Christmas presents for loved ones.

Did you know that Christmas trees have been sold commercially in the United States since about 1850? Until fairly recently, all Christmas trees came from the forest. That’s what we learned at gertenson.com, at least. They also tell us that thirty-four to thirty-six million Christmas trees are produced each year and 95 percent are shipped or sold directly from Christmas tree farms.

Of course, all those trees wouldn’t be “Christmas trees” if they weren’t decorated! From have-a-merry-christmas.org – “What were the first Christmas tree decorations? Red apples attached to tree limbs, candles, strings of popcorn, cookies, dolls and small toys.”

“Why do we put lights on Christmas trees? This tradition began with the legend of Martin Luther’s first Christmas tree. Martin Luther attached candleholders to the tree limbs and the custom quickly grew in Germany, then throughout Europe. The lights represented baby Jesus bringing hope and light to a dark and hopeless world.”

For some Christmas specifics along commercial lines, the November 23, 2021 U.S, Census Bureau update gives some interesting facts projected for 2021 holiday season. BUT…..as you see, their numbers as projected are from 2020, and 2020 being what it was, it’s anyone’s guess!

$14.6 billion. The estimated retail sales for the nation’s department stores in December 2020, a decrease of 20.0% from $18.3 billion in December 2019. Source: Monthly Retail Trade Survey

701.9 million. The value of U.S. imports of tapered candles in 2020. Most of these came from Vietnam, representing more than 48.1% of America’s imported tapered candles, followed by Canada with 21.6%. Source: International Trade Statistics, www.census.gov/trade

As most of us are once again planning traditional family Christmas gatherings this year, wishes to you for a joyful holiday season as we remember to count our many blessings as we celebrate the true meaning of Christmas.