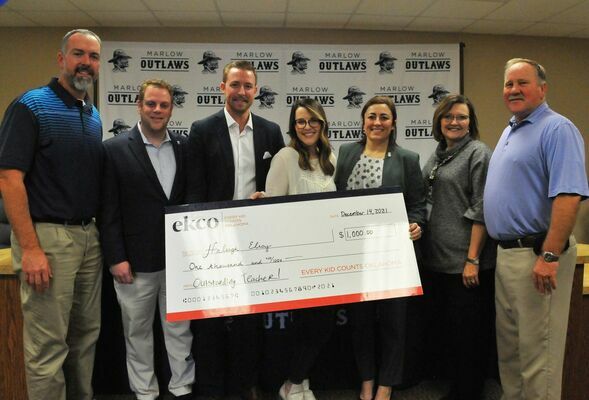 Elroy was nominated by Marlow Superintendent George Coffman for the work she has done inside and outside of the classroom.

“I knew exactly somebody who could use this, and has gone above and beyond for Marlow Public Schools,” Coffman said.

This is Elroy’s sixth year of teaching and her third at Marlow schools. She is a Marlow graduate and said that throughout her college education she had the goal to teach at Marlow.

“It’s a family business for me,” Elroy said. “My mom taught third grade for about 30 years for this district, my grandfather used to be the principal at Marlow. For me, it just seemed like common sense to do.

“I think when we added up the years with my mother and grandfather and me, it ended up nearly 65 years of service combined at Marlow,” Elroy said.

Marlow High School Principal Bryan Brantley said that he knew Elroy would come back to Marlow to teach; she told him she would.

“She’s one of ours,” Brantley said. “When she graduated high school she told me, ‘Mr. Brantley, I’m going to come back here and teach history at Marlow High School.’ She knew at 18 years old what she wanted to do.”

Coffman said that Elroy is a “prime example” of the kind of person needed in education.

“It’s critical, because we have a lot of retirees happening and we need to get some bright young people in,” Coffman said.

EKCO provided the initial $500 for the scholarship and DRH Health provided matching funds.

“EKCO is pleased to reward teachers across the state who are working on innovative classroom or extra-curricular projects that benefit their students or their colleagues. Local administrators have nominated one innovative teacher in their district for a scholarship that they can use for a professional development course, a specific curriculum training or to fund a project or initiative they are working on in their classroom,” the organization said in a press release.

Calf fries and sweet tea served with a side of ...