Young Outlaws: Working on the Sidelines 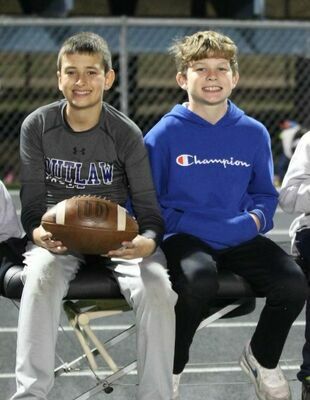 Editor’s Note: This content is part of The Review’s special section commemorating the Outlaws’ historic 2021 season and the Class 2A state championship win. The special section was included with the December 16 edition.

Cannon Tyler and Jett Gilbert aren’t on the Marlow Outlaws high school football roster, but their presence on the sidelines of games this season has been vital to the team. The two Ball Boys are students at Marlow Elementary School and assist Superintendent George Coffman with making sure that his work off the field goes smoothly.

Coffman said that they’re also learning as much as they can about the game.

“I love my Friday nights because I’ll have Jett on one side and I’ll have Cannon on the other and 87 million questions later, they’re analyzing everything,” Coffman said. “It reminds me of my boys.”

“It’s really awesome to be able to see the game,” Tyler said. “It’s really exciting to be right there and see it in person and get some learning experience from coaches and players.”

Both boys said that they were nervous going into the fourth quarter with the Outlaws up by just one point, but that they knew as soon as Brennan Morgan forced a Washington fumble and William Hewitt recovered the ball for Outlaws, the game was over for the Warriors.

“I was nervous toward the end but as soon as that fumble happened I knew it was game,” Gilbert said. “We were so happy.”

Tyler and Gilbert said that they know their jobs are important.

“Me and Mr. Coffman carry the game balls around and when one goes in, if there’s a long pass or something I’m the one who goes to get it. I catch field goals, kickoffs, and I hold Game Ball #3,” Tyler said.

“If Ball 1 doesn’t score, Ball 1 becomes Ball 3 and Ball 2 moves up,” Coffman explained. “The other night, a ball went in and we didn’t score on two possessions? It went out and we threw the one in that did score.”

“We almost had to put Ball 3 in there for a second,” Tyler said.

Gilbert’s job is to help his brother, quarterback and kicker Jace Gilbert, to swap out his shoe for kicks and take the tee on and off the field.

“He’s the Shoe and the Tee Man,” Coffman said.

Coffman joked about Gilbert being the only Ball Boy in his career to get a penalty flag in high school football, which was the result of miscommunication with officials when Jett ran out to change shoes with Jace.

“That particular game, the guy on the sidelines didn’t tell the White Hat who controls the whole game, so when Jett ran out there with a shoe for his brother, he just about panicked seeing him run out there,” Coffman explained.

“Now I just run out to the numbers,” Gilbert said.

Joking aside, Coffman said that Gilbert and Tyler were essential to the team’s great season.

“These two boys are vital to our success in our school and our football program,” Coffman said. “I have enjoyed them immensely and given me some moments this season I will cherish forever. They’re great kids.”