From an Outlaw to a Cyclone 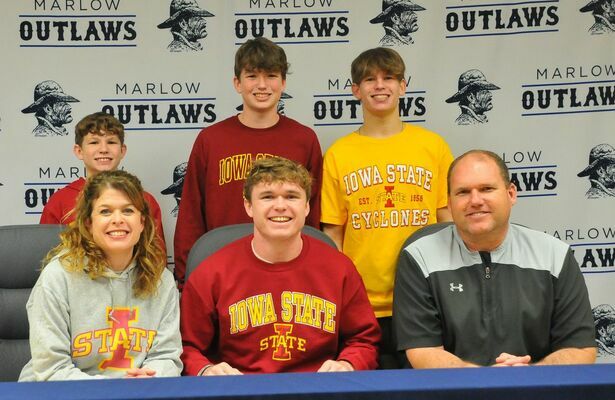 Marlow senior Jace Gilbert (center) was joined by friends, family, and faculty on Wednesday as he signed his Letter of Intent to play football at Iowa State after graduation. Photo by Elizabeth Pitts-Hibbard/The Marlow Review

Marlow senior Jace Gilbert signed a Letter of Intent to play football with the Iowa State Cyclones next year, putting a cap on a stellar career and an historic football season with the Outlaws.

Gilbert said that his decision was based largely on the Iowa State program’s team culture and its similarities to that of Marlow football.

“It’s very similar to what Coach [Matt] Weber has built here at Marlow, obviously on a bigger scale,” Gilbert said. “The things they do, the things they stand for…they always say ‘we do things the right way,’ and they really do, with academics and the program.”

Gilbert said that academics are a priority in addition to his football career at Iowa State, particularly because he plans to major in Education and eventually get a Masters degree.

“I’d really like to coach and hopefully be a principal,” Gilbert said. “That could change, but that’s my plan right now.”

Gilbert will move to campus in early June and start summer workouts with the Cyclones in advance of the 2022 season. He said that he was looking forward to learning more about the area.

“Ames [Iowa] is a great town; I really like it,” Gilbert said. “I’m really looking forward to getting there and getting with the team. The coaching staff is incredible and the game day atmosphere is awesome.”

Gilbert also played quarterback for the Outlaws, completing 298 for 404 passes (71%) and scoring 53 touchdowns. He also had 1,699 rushing yards and 36 touchdowns, averaging nearly 5 yards per carry.