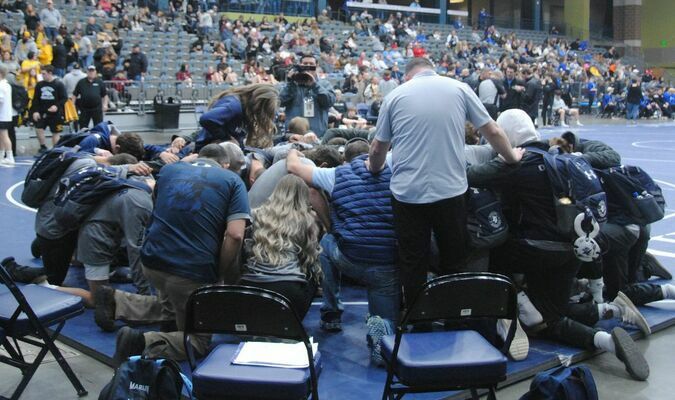 The Marlow Outlaw wrestling team earned their second straight Dual State Championships on Saturday, defeating Pawnee 71-12 in the quarterfinals, Vinitia 57-12 in the semifinal, and Jay 54-31 in the final round. Photo by Miranda Hance/The Marlow Review 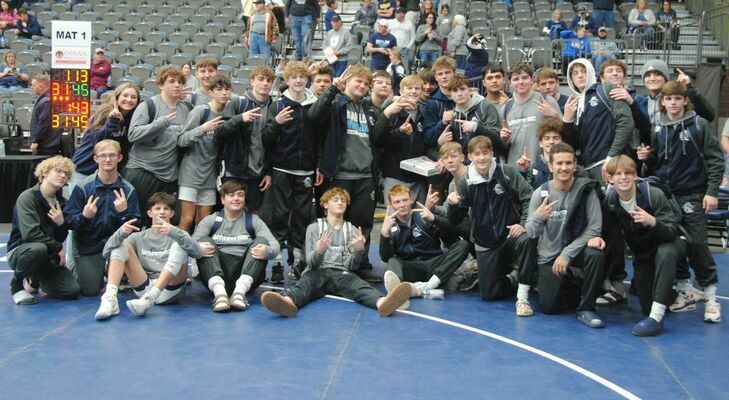 Marlow Outlaw wrestlers defeated Jay, 45-31 and earned their second Dual State Championship in a row in Enid last weekend, bringing home some hardware and a renewed enthusiasm for competition. This is the fourth State Championship title for Marlow activities this school year.

Head Coach Andy Howington said that the team faced a unique challenge at the beginning of the season, because most of the wrestling team was entrenched in the football playoffs. The Outlaw wrestlers had a one-day break between winning the Class 2A State football Championship and starting wrestling workouts.

“We were a month behind everyone else,” Howington said. “We wouldn’t change that for the world…it’s awesome for them and awesome for our town, but we had to bounce back from that pretty quick and change our mindset.”

Howington said that the Outlaws worked throughout the holiday break to get into form for competition.

“Every one of them bought into the work and hopefully that’s paying off for us right now,” Howington said.

The Outlaws were ranked at the top going into the Dual State competition last week, but the team was ranked lower early in the season. Howington credited the team for being motivated to succeed based on their drive to rise in the rankings.

“We were kind of underdogs,” Howington said. “We were ranked third for a while, and even when we beat a couple of that were ranked higher than us, we were still below them. It felt like disrespect, but the kids kept to the work and we went up there and wrestled well.”

The Outlaws faced Pawnee in the quarterfinals on Friday, winning 71-12. Twelve of the fourteen Marlow wrestlers won by fall in the first round.

The semifinals on Saturday saw Marlow against Vinita on the mat with eight pins by the Outlaws and five decisions for a 57-12 victory that sent Marlow to the finals against Jay.

“I knew they were going to be tough, but I think a tougher matchup would have been Blackwell,” Howington said. “But Jay upset Blackwell, kind of a reverse from last year when Blackwell upset Jay or we would’ve met them in the finals.

“I liked our matchups there against Jay, though,” Howington added. “We did well against them.”

The Outlaws wrestle next at the Regional tournament at Plainview beginning on Friday, February 18. Howington said that the competition will be stiff but he believes the Outlaws are prepared.

“We have a tough Regional, but I think the kids peaked at the right time,” Howington said. “A lot of teams got more matches than we got, but I think we’re about ready.”

Howington said that there are no “key” wrestlers this weekend because the Outlaws need every point they can get.

“Everybody’s a key,” Howington said. “Last year we qualified 13 for state, and we ended up winning by 5.5 points. Each of those kids who qualified, even if they just won one match, that’s one point or two points, and that’s what won it for us.”