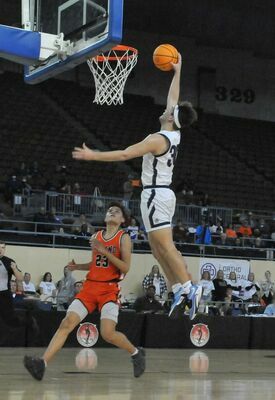 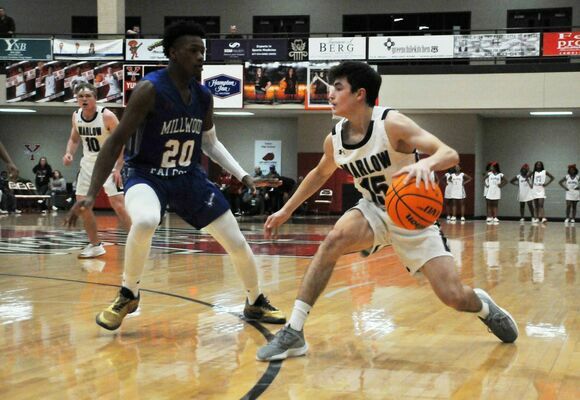 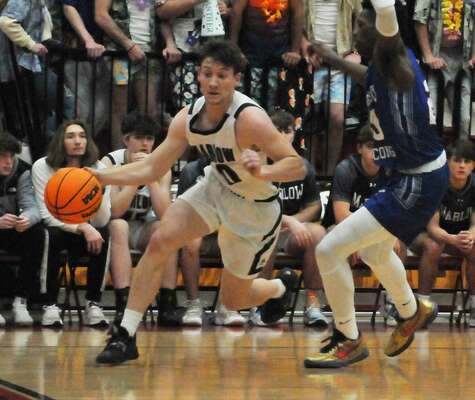 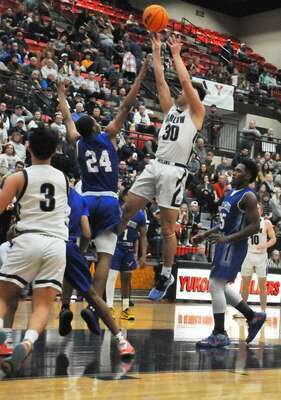 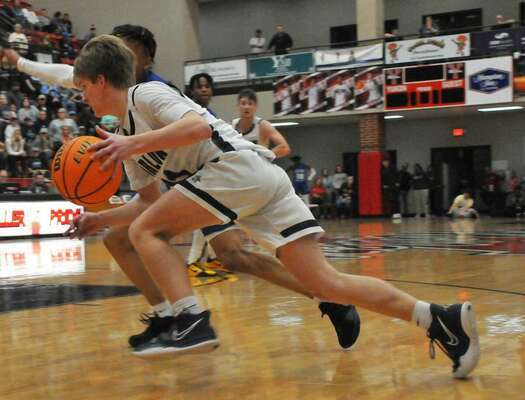 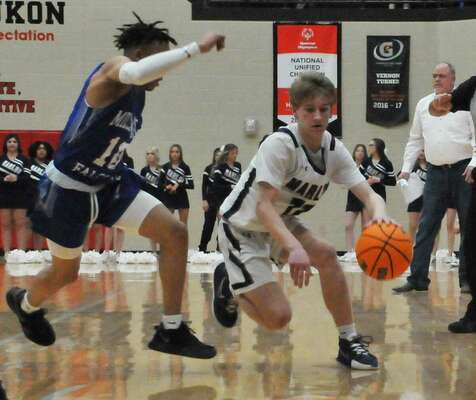 The Marlow Outlaws ended the 2021-2022 basketball season on Friday with a 22-4 record after losing to Millwood, 44-42, in the semifinals of the Class 3A State Tournament. It was Marlow’s first appearance in the semifinals in 50 years and the fourth in school history.

The Outlaws’ chance at State came after beating the Roland Runnin’ Rangers 52-43 in a fast-paced quarterfinal game at the State Fair Arena earlier in the week.

After the decisive quarterfinal win, Marlow head coach Kirk Harris said that he was pleased that the Outlaws were advancing after several visits to the first round of the State Tournament.

“It’s a great feeling for us…we’ve been here several years and lost a couple of one-point games,” Harris said. “They did a great job.”

Josiah Johnson was the standout Outlaw in the game against Roland, shooting 12 for 16 from the field for 28 total points. Julian Marroquin also had a big day, with his first nine points of the season.

“Marroquin had his best game of the year,” Harris said. “He hit some big shots and he’s a great team leader.”

The win was the 500th for Harris as coach.

The semifinal game was played on Friday at Yukon High School, where Johnson again was the high scorer for the Outlaws with 15; Jace Gilbert put up nine and Avrey Payne had 8.

Although Millwood came out fast in the first period by outscoring the Outlaws 13-8, Marlow whittled the lead to just four points to end the half with Millwood up 24-20.

The third period was all about defense as both teams scored fewer than ten points; the fourth period began with Millwood leading 33-25.

The Outlaws continued to chip away at the Falcons, including baskets by Johnson, Will Bergner, and Gilbert. Johnson hit a three-pointer late in the period to cut the lead to three.

Millwood’s rebound game stacked up to retain the lead right up until the end. Johnson hit another three-pointer at the buzzer to make the score 44-42. Officials called to put .3 seconds on the clock with Millwood inbounding. The Outlaws’ attempt to get the ball for a last-ditch effort was unsuccessful.

The Falcons went on to defeat Community Christian, 53-50 in the 3A State Tournament final on Saturday.

Speaking after the game, Harris said that Millwood’s pressure and rebounding was the key to the Falcons’ win.

“For us to win, we had to stay even on the boards, and we didn’t,” Harris said. “They really hurt us with offensive rebounding and I felt like that was the difference in the game. We knew they’d pressure us…but we didn’t rebound the ball and block out like we needed to. That was a key factor in the game.

“They had a bunch of second-chance opportunities, and that made the difference in the game.”

Harris felt the Outlaws handled the ball well in the semifinals, however.

“For the most part, we took care of the ball…we run a lot of sets in offense and their pressure really takes you out of it. We had to do some things we weren’t comfortable with, but I thought we adjusted as the game went on,” Harris said.

Reflecting on the season, the coach said that the team has come a long way.

“Those seniors were a big part of it… I’m super proud of them and their effort. What I like about it, those were all multi-sport guys…they’re fixing to be the baseball guys and the track guys. It’s not like I’ve had all of them in the gym since October,” Harris said. “Every one of those starters and probably eighty percent of the team was on the football field until December.”

“Marlow community and kids really support athletics and get behind you and give you the chance to have some success,” Harris said. “In all the years I’ve been doing this, I think we’ve only had three seasons with losing records, and that’s the biggest thing….We’ve had our ups and downs, but always competitive, and we have the work ethic to get there.”