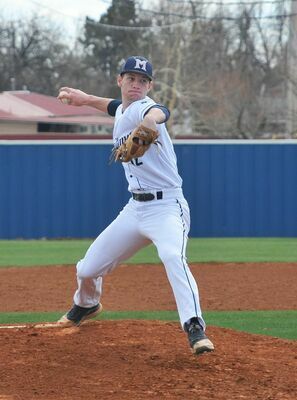 Will Bergner pitches in Friday’s game against Purcell. He went three innings, allowing two hits and one run while striking out two and walking one. Photo by Elizabeth Pitts-Hibbard/The Marlow Review 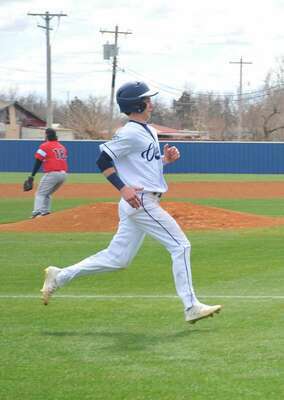 Kole Seeley scores on a line drive double to center by Will Bergner at Friday’s game against Purcell. Photo by Elizabeth Pitts-Hibbard/The Marlow Review 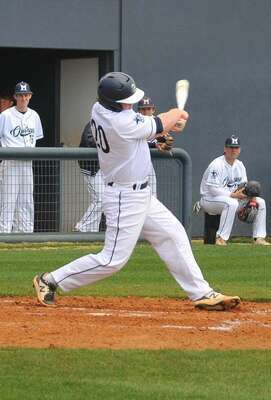 Kyle Wilson doubles on a line drive to center field in Friday’s game against Purcell. Photo by Elizabeth Pitts-Hibbard/The Marlow Review
Previous Next

Weather has wreaked havoc on baseball schedules early in the season, with wintry conditions canceling games just before spring break and drenching rain affecting field conditions this week. Nonetheless, area baseball teams have made it through a partial schedule and look to tournaments and festivals this weekend.

The Outlaws’ schedule has been the most full of all area teams, owing to their travel to Texas for three games on spring break. After a strong start with 13-0 and 11-0 wins over Dickson despite the Outlaws’ short roster, games at Kingfisher and Durant were rescheduled due to basketball post-season. The trip to Port Aransas resulted in two losses (one in extra innings) and one win for the Outlaws.

Marlow won a Friday afternoon home game against Purcell, 13-1, and their games with Madill were delayed by the heavy rains on Monday. Tuesday’s double-header with Madill ended in 11-1 and 17-1 wins.

The Outlaws play this weekend at the Chickasha Tournament, first against 6A Lawton on Friday at 8pm. Marlow High School JV2 will be at the Union City Wood Bat Tournament this weekend and Marlow Middle School hosts the Marlow Tournament Thursday – Saturday.

Class A Central High is 1-3 for the season after opening strong with a 19-13 win over Empire earlier this month. The Bronchos followed it up with a loss to 2A Wynnewood on March 3, 0-13. A tight game against Cyril on March 7 ended with a one-point loss for the Bronchos, 6-7 before the break. Games with Elmore City-Pernell and Wayne were canceled. Central High hosted 2A Walters on Saturday and lost 2-15. Monday’s scheduled home games with Bray-Doyle and Wilson were rained out and will be rescheduled.

Central High hosts the Red Dirt Classic this weekend and the Bronchos’ first game of the bracket is vs Konowa at 6pm on March 24.

The Donkeys are 0-6 after a slow start to the season; both regular-season openers against Class B Grandfield and Tipton were canceled before the Joe Lumbert Memorial Festival kicked off on March 4. At the festival, hosted at home, the Donkeys fell to Cement 1-12, went scoreless against Velma-Alma (ranked #17 in Class A), and fell to Geronimo 2-22.

Bray-Doyle closed some gaps in later games before the break, with Empire eking out a 16-12 win and Cement only winning by one run on March 10. Subsequent games in the schedule were canceled (Geronimo) or rained out (Central High, Wilson), so the Donkeys will look to pick the season back up against Ryan at home on Thursday at 5pm.