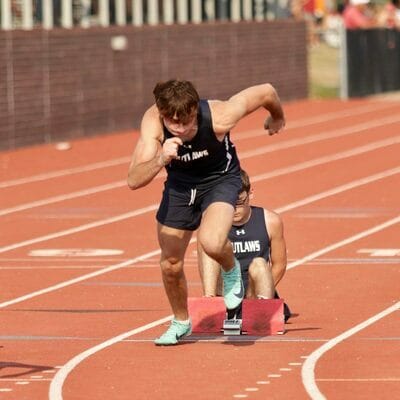 MHS Senior Case Rich, pictured above in a relay event, broke the Marlow school record in the 200m dash at Regionals on Saturday and will compete in four events at State this weekend. Photo courtesy of Shannon Sides McCord

Both Marlow High School track teams brought home Regional Championships on Saturday and are headed to Western Heights high school on Friday and Saturday for Class 3A State competition. The Lady Outlaws won with 133 points, defeating Crossings Christian (124) and Heritage Hall (121) for the Championship. The Outlaw boys dominated their competition with 146 points, well ahead of Heritage Hall (95) and Lindsay (81).

The Outlaws will take competitors to State in 15 out of 17 possible events, and coach Bobby Wortham said that the team results were outstanding.

“We’re peaking at the right time,” Wortham said. “The guys are putting up their fastest times now, when they should be.”

Wortham said that there were several standouts in regional competition.

“Jonathon Brite is a freshman and he qualified in three events,” Wortham said. “Case Rich is going in four events. Cody Davis was a surprise…he’s never thrown the discus before this year. He came out two or three weeks into the season and started throwing and now he’s going to State in discus.

“You can just go down the list of kids and they’re all doing well. It’s good for the future, too, to have some underclassmen on the team and doing so great.”

Wortham emphasized the Class of 2022 as leaders throughout the season and year.

“The senior class, it’s been evident all year that this is a special class,” Wortham said. “They hold it together and they like competing. It’s just a neat environment.”

Wortham also credited the coaching staff for leading and encouraging the team, including coach Jimmy Dial.

“He’s probably the best pole vault coach in the state,” Wortham said. “His record is unbelievable. He’s probably got 25 state champions to his credit.”

“We’re going to try to break the 4x400 relay record at State this week,” Wortham said. “The school record is 3:29 and the guys [Case Rich, Jonathon Brite, Kenton Jones, and Caden Kirkland] ran 3:30 at Regionals.”

Coach Matt Ivory added that the Outlaws could break the 4x200m relay record as well; the school record is 1:32. In regional competition, the relay team of Kenton Jones, Cody Weber, Caden Kirkland, and William Hewitt ran 1:33.68 for a fourth-place finish.

Lady Outlaws coach Brian Miller said that the girls were looking forward to competition this weekend after their standout performance at Regionals.

“We ran extremely well in what we needed to at Regionals,” Miller said. “Some of the events, we didn’t have to go all-out in order to still win, and we have a good chance at State to place in the top three or four.

“We qualified in everything we thought we would,” Miller added. “I told the girls, realistically, if things fall right we have the chance to finish in the top three or four at State.”

Miller said that it all depends on the Lady Outlaws’ determination and precision in their events.

“No matter what happens, if a baton falls here or there and you move up a couple of spots, before you know it you’re in the running for the top spot,” Miller said. “With who we’re taking to State we have a good chance in everything we’re doing.”

Miller said he anticipated that Korie Kizarr had the potential to bring home four medals this weekend, hopefully all gold ones, but that others on the team had a chance to place as well.

“I’m excited to see who else steps it up a bit. We just hit our peak this week, and we never want to peak early. It’s what you do two weekends: Regionals and State. It’s not about winning this or that season track meet, it’s about getting in shape and running to the very end. That’s what we’ve done.”

Miller said that the Outlaws focus on mental strength as well as physical strength, and that the culture at Marlow contributes to that.

“It’s just what we believe here,” Miller said. “We’re competitors when it comes time for playoffs and post-season. We saw that with the boys with state championships, but these girls have had so much success. That mentality all over the school system, they learn that they can beat anyone on any given day. I’m looking forward to seeing what these kids do in competition this weekend.”

Preliminary competition begins on Friday at Western Heights and finals start at 10am Saturday.