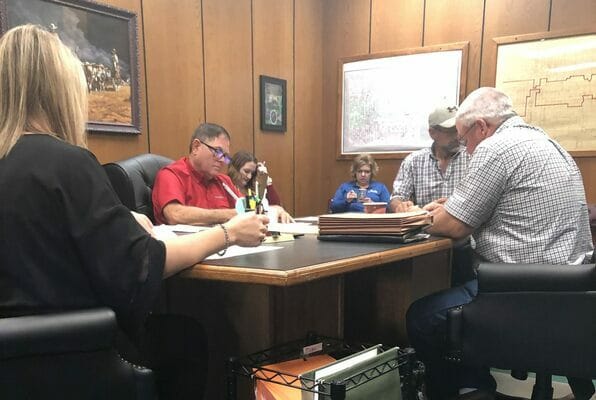 The Stephens County Board of Commissioners met with the Stephens County Excise-Equalization Board in a joint session on Monday to discuss preliminary budget planning for Fiscal year 2022-2023 along with elected officials and department heads.

Addressing the group, Excise Board member AL Hutson said that they had begun projections for the upcoming fiscal year.

“We thought we were going to have about a $400,000 increase in funds in the coming year, but now that decreased to $160,000 for the new year,” Hutson said. “That’s still somewhat of a moving target but it shouldn’t change much.”

Hutson said that interest income would affect the county’s ability to have increases in general government expenses such as salary increases.

Hutson said that County Treasurer Debbie Burden is working to finalize those numbers.

“Our first priority is to maintain a healthy reserve,” Hutson said. “We know we’re going to have the opportunity to spend quite a bit of money on the roof of the courthouse and try to get the leaks stopped that’s affecting the upper floor. We don’t know exactly what that’s going to cost but we know it’s going to cost quite a bit.”

Hutson said that in developing budget projections, the Board would still accept requests for additional funds from individual departments.

“Given what I know today, though, it’s going to have to be something that’s seriously needed or it won’t get approved,” Hutson advised.

“We fully realize what everyone in this room is going through because we’re all going through the same thing,” Hutson concluded. “You just don’t know how much [costs] are going up and how long they will continue to. We would like to be able to do something about some of that but it’s been my long-term observation once you give people something, they’re really reluctant when you say, ‘We’ve got to take it back.’

“We want to make sure that whatever happens going forward is sustainable before it gets done…that’s our thought process,” Hutson said. “It’s a lot of moving parts.”

After the joint session concluded, the Commissioners examined bids for grader blades and tires, deciding to accept low bids per item on the grader blades and tabling the discussion of tire bids until the next meeting so that each District could review individual needs.

The Commissioners also approved a notice of employee appointments and terminations for the Stephens County Sheriff’ Department, which included the employment termination of Undersheriff Bobby Bowen and appointed Rick Lang to Bowen’s former position. Lang formally began his service as Undersheriff on June 2.

Commissioners Vote for Use Tax, Continuation of...

High usage and wholesale prices cause spike in ...