Cross Country seniors run with leadership through 4A season 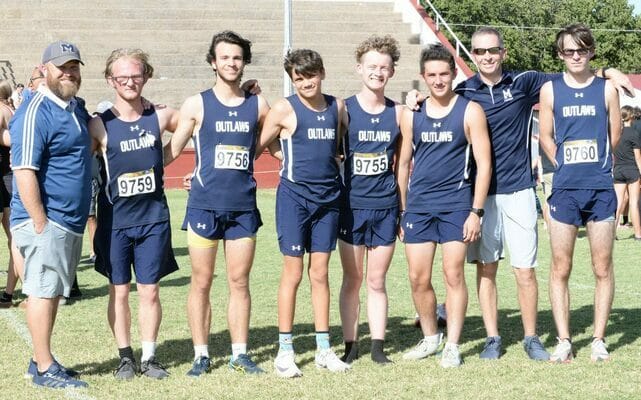 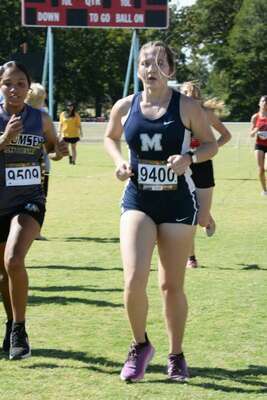 Skylar Ramsey nears the finish line during the Cross Country regional meet, Saturday, Oct. 22, 2022, in Waurika. She is a junior at Marlow High School. Photo by Toni Hopper/The Marlow Review 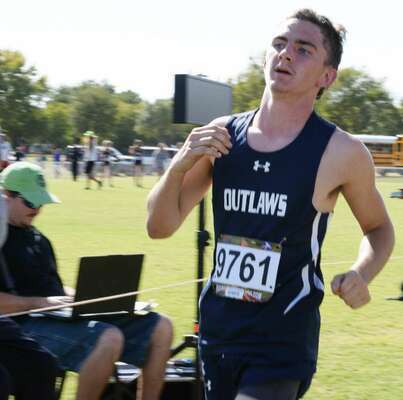 Marlow’s Cross Country program began in 1985 and during its history has mostly been Class 3A, with the exception of being in 4A possibly twice. That’s the story from Assistant Coach Matt Ivory, who might even have the unofficial title of “resident historian.”

Head Coach Mikey Eaves began coaching the teams in 2009, and said this is his first year in 4A. Why are these bits of history significant? Because both the boys’ and girls’ teams competed Saturday at the 4A State Meet held at Edmond Santa Fe, and finished with a status they can be proud of, agreed both coaches.

“We did have two All Star by Class (athletes), which is the top 15 seniors in each class,” Eaves said. “They were Kyah Blundell and Tyler Brown. We will know if Ean Hewitt did at a later date.” Eaves praised Blundell for her dedication to the program over the years, and said gaining the All Star by Class recognition is a well-deserved honor for her.

Overall, as a team, the boys placed 13th and the girls 18th.

“It has been a great year for the Lady Outlaw Cross Country team,” Eaves said. “They have worked so hard to meet some individual goals through the year and as a coach, that is really fun to watch.” Eaves added that this is a team that lost three out of the top seven from last year’s third-place finishers.

“The cool thing about coaching at Marlow is the character of the kids we have the opportunity to work with,” Ivory said. “They do not ever back down from a challenge and win or lose you never have to wonder if they gave their all that day.”

Moving into that 4A Class meant each individual runner had to push a bit harder than they did in year’s past. Ivory said it was a significant step up in competition and he believes the athletes handled it well.

“This group has been faced with a lot of adversity throughout the year and it all started with the move to 4A. Despite all of that, we as coaches, never heard them complain which was a direct result of great leadership displayed by our three seniors. Coach Eaves, Coach Tammy Miller and I are proud of that approach as we watched them represent Marlow with great integrity all year,” Ivory said.

“Tyler Brown ran well and had a little bad luck during the race that handicapped him, but he persevered and was a great leader for our team today as he has been all year,” he said, referencing Saturday. “He likely will be named All-Star by Class in the coming weeks for his efforts.” Hewitt wasn’t able to repeat as All-State this year, but Ivory said Hewitt’s career in cross country has been a model of consistency both in practice and at the meets. I am certain he will be a success in all he pursues because he works hard and has a great attitude.”

And there was high praise for senior Caleb Sloan, who Ivory deems a real success story.

“He has become a very driven young man who knows who he is and where he is headed. I am very proud of his accomplishments both on and off of the course,” Ivory said.

Kade Sullivan, a junior, ran over a minute faster than last year on the state meet course. “That is mainly due to the real development of confidence in this past year. I look forward to watching as he leads the team next season.”

And if there ever were an athlete inspired story, it would be the lone freshman on the boys’ team. “Tommy Miller is one of the toughest kids we have coached. After a great meet last week, he lost a shoe early in the race and was forced to kick off the other one. He finished pretty well despite running in socks over rough terrain including several stretches of gravel. As he matures, he has a bright future in this sport.”

“Just as Coach Ivory said about the boys, we have some great kids that know how to work and know what it takes to be successful. I couldn’t be happier with a great group of kids from this year’s boys’ and girls’ teams,” Eaves said.

Dedicated team players are how Eaves describes juniors Lauren Ivory and Skylar Ramsey. “Lauren is a natural born leader. She ran a great State race and has done a great job for us this year. Skylar is one of the toughest girls in our group and really fought through some health issues this year but was determined to help her team in any way she could. I look forward to one more year with her.”

Sophomores Brileigh Soell and Jessica Bayless excell as they continue with the program, each committing to their challenges. Eaves said Soell ran her best race of the year at Saturday’s event, and believes Bayless has a great future in the program.

Rounding out the girls’ team are freshmen Gracee Ottinger and Katelyn Reynolds.

Ottinger applies a great work ethic to her athletic skills.

“Being a freshman, you never know how they will respond to such a big meet like this one, but she really showed no fear and ran a great race for our team. Marlow needs to really be watching for this young lady and the success she will have in this sport,” he said. Reynolds also gained valuable experience this year and Eaves is just as eager to see how she grows over the next few years.

The full results can be found at http://www.ohstrack.com/ccresults2022/ccstate4aedmondsantafe102922.htm